Get a piece of our weekend storage pizza 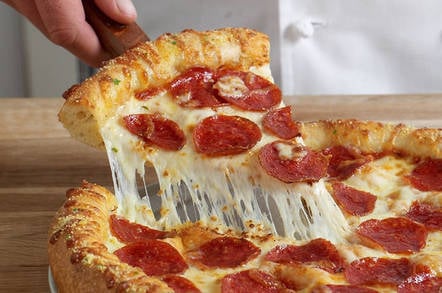 Thick crust, thin crust, who cares, it's storage pizza time, cooked in The Register's own wood-fired oven, with lots of bark and bite.

The first item on the menu is the ...

Acronis has announced its Data Cloud, saying it's a unified platform for all current and future cloud-based services that Acronis is bringing to the market for service providers.

AetherWorks with the works

AetherStore was developed by AetherWorks of New York started life as a shared storage resource based on built using spare disk capacity in a network of peer-to-peer workstations. We might call it fog-based storage in that it is storage based on amalgamating distributed capacity at the network edge.

Now the AetherWorking people have developed ActivAether; a fog computing technology that extends cloud computing to the edge of a network, enabling any computing device to host software services and process data. It uses the spare computing power of the billions of computers worldwide that sit idle throughout the day.

The AetherWorkers say ActiveAether beats cloud storage with lower latency, significantly lower bandwidth consumption, and an open market for computing time on both CPUs and GPUs worldwide. Blockchain is involved as resources on ActiveAether are bought with the crypto-currency.

Head Aertherist Dr. Robert MacInnis, Ph.D., said; "This network stands as an immediate competitor to what we know as the cloud - a collection of data centers owned by current market leaders: Amazon, Microsoft, and IBM. By combining a blockchain-based cryptocurrency with a patented, next-generation software service architecture, ActiveAether is bringing equitable, pervasive, service-oriented computing to the world.

“Blockchain-based distributed ledgers like Ethereum are now proven technology, and they are the enabling force behind the ActiveAether global market.By spreading the power and the responsibility for the world’s computing infrastructure, we are democratizing the most potent channel for good that humankind has ever known, and creating a more resilient, fault-tolerant global Internet.”

Comtrade has an HYCU product, a purpose-built backup and recovery for Nutanix. HYCU uses Nutanix v3 APIs and all of the backups are incremental. It has a new release, v 1.5.2, supporting the use of Nutanix dense nodes as backup targets, using the Nutanix scale-out storage protocol (ABS).

Nutanix OEMs like Lenovo HX and Dell XC can use this feature.

Comtrade recommends each customer set up a separate Storage Dense cluster or, if they have multiple clusters, they add capacity to existing clusters and do cross-cluster backup. This way, their 3-2-1 backup best practice is maintained.

The full feature list can be found here [PDF].

International Data Corporation (IDC) forecasts the worldwide software-defined storage (SDS) market will see a compound annual growth rate (CAGR) of 13.5 per cent over the 2017-2021 forecast period, with revenues of nearly US$16.2 billion in 2021.

Within the SDS market, the expansion of three key sub-segments – file, object, and hyperconverged infrastructure (HCI) – is being strongly driven forward by next-generation datacenter requirements.

IDC says the HCI sub-segment is one of the most active merger and acquisition markets as the major enterprise storage systems providers prepare to cap anticipated SAN and NAS revenue losses to HCI as enterprises shift toward SDS offerings.

The E-Series now support 6 x 12TB drives, for a total capacity of 720TB in a single 4U unit, and up to a total of 2.16PB in a system. Suggested use case areas are media and entertainment, digital video surveillance, and backup.

Nexsan says these products are reliable enough for deployment in ships, transit stations, and remote outposts.

SoftNAS is a startup developing NAS services in Azure (shades of NetApp, hey.) You might even call it a software-defined fork lift truck. We'll get to that in a minute.

SoftNAS was co-founded in 2012 by Rick Braddy who is its CEO and CTO. William Hood was the other co-founder and he left his SVP Cloud Markets post in December 2014.

The company has built a Cloud Data Platform product, to help enterprises migrate apps to the cloud, and it comes in three flavours;

SoftNAS claims Cloud Platinum’s design and configure wizards enable IT to “Lift and Shift” live data from an on-premises NAS or file server to the desired SoftNAS Cloud destination point, and then migrate the data quickly, whether to AWS, Microsoft Azure or VMware-hosted clouds.

Lift and Shift sounds like a fork lift truck operation.

It enables live data migration, avoiding the need, SoftNAS claims, to freeze production systems for days, weeks or months while data volumes are offline migrated to the cloud.

Big ideas from another small company. If you want to play with the beta and its software-defined fork lift truck then point your browser here.

DSM v6.2 beta is available for download here and now.

+RegComment; Considering that Mike Crest only went in September and that said departure was abrupt, this is a remarkably fast appointment. Signorello left OnX, which was acquired by Cincinnati Bell in July, earlier this year; his CEO role no longer being required.

DataBricks has appointed David Wyatt, who built MuleSoft’s EMEA Business over the last four and a half years, as VP and General Manager of Databricks EMEA.

Code42 has hired Rob Juncker as SVP for Product Development. He will focus on leading, mentoring, and growing the software development and delivery teams at Code42, and accelerating product innovations. His CV includes stints at Ivanti and being senior director for R and D at VMware

Junker's prepared quote was amusing; "Minnesota, or the Silicon Tundra as I like to call it, is a shining star for innovation and providing a new approach to the market, and has some of the best engineers in the country."

Anyone experienced with a Minnesota winter will understand what Silicon Tundra means.

Andy Hill has returned to Nexsan as VP of EMEA Sales and will be heading up Nexsan’s EMEA strategy, driving sales, extending partnerships, and accelerating the company’s momentum across EMEA. He previously ran EMEA sales for Nexsan from 2006 through 2013, growing the business to $26M annual sales. Do it again please Andy!

Unified Analytics Platform company DataBricks will launch in London, UK, following a $140m investment round earlier this year. It reminds us the company’s cloud-based platform is powered by Spark, the most popular open source technology for Big Data processing and analytic workloads, and an invention of the six co-founders of Databricks.

Compared to Apache Cassandra, DataStax says DSM has better performance, robust graph, analytic, and search capabilities; and a consistent security model across all its data services.

Kaminario has appointed ECS Computers Asia as its authorized distributor for Southeast Asia.

Sphere 3D, describing itself as a containerization, virtualization, and data management provider, says business unit HVE has been awarded a contract exceeding $1mn. This is a big deal for perennially loss-making Sphere 3D.

+Comment All your data protection are belong to us

Analysis Oh and a touch of HCI, says data protector as it waltzes into adjacent markets