Video games used to be an escape. Now not even they are safe from ads 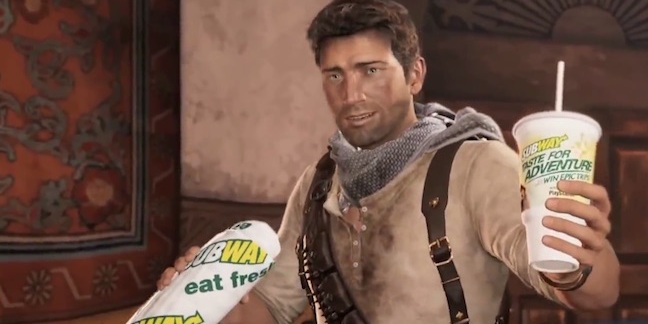 Where winners eat ... TV spot for Subway pushing an Uncharted 3 promotion. Thankfully, nothing in the game was so shameless

VB2017 Poor disclosure and intrusive advertising are becoming a bête noire for gamers who increasingly find themselves getting fragged by promos.

Adverts in gaming or advergaming systems are becoming more complex as marketeers resort to techniques that embed advertising deep enough so that earlier ad-blocking attempts no longer work. The market was explored in a talk by Chris Boyd of Malwarebytes titled Exploring the virtual worlds of advergaming, which was delivered at the Virus Bulletin conference in Madrid last week.

Around $41bn of the estimated $90bn gaming market is spent on mobile and around $2.7bn on VR. A survey for game engine developer Unity Industries found that 62 per cent of gamers would regularly interact with ads for an in-game reward.

Developers are making use of heat maps to calculate the best location for placements. Game level design sits hand in glove with exposure to branding. For example, in first-person shooters, narrow checkpoints will be covered in posters. Overturned vending machines that offer the sole source of cover in exposed areas may be festooned with advertising. Players are obliged to stand up to shoot before crouching down to cover behind a branded logo multiple times in order to complete a level.

Mobile apps have embraced advergaming, trending against upfront payments in favour of free games financed through data collection, adverts and in-app purchases. Of the top 30 games on Google Play, 27 apps contained ads and the same number contained in-app purchases. All were free to download and targeted casual gamers.

Terms-of-use policies for mobile games can be absurdly long. The linked privacy policies for Tetris run to 407,000 words, compared to 450,000 words for the entire Lord of the Rings trilogy. The Tetris count would be even higher but for the 30 per cent of pages that were unobtainable. "This is a truly astonishing number of words to attempt to read, in order to play a simple mobile game," Boyd commented.

In the arms race between ad-slingers and ad-blockers, DNS blocking offered one way to filter out ads from games. One of the newer blocking counters involves turning ads into a component of gameplay. Players need to view an ad to progress or power-up or even keep playing. This approach is most prevalent on free-to-play mobile games.

And if ad-blocking or filtering moves into augmented reality, something that wants to add digital elements to the real world – and developers are trying – there could be serious health issues with tracking, analytics and privacy. ®