Let me tell you about my mother 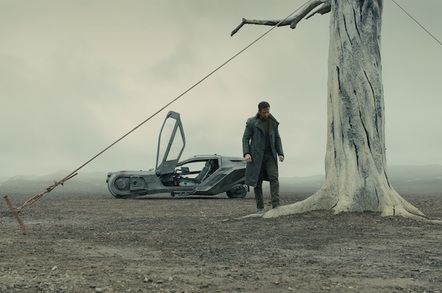 No spoilers Stepping into the cinema to watch Blade Runner 2049 was a nervous moment; after The Phantom Menace and Prometheus, was another studio about to take a steaming dump on a pivotal film of my youth?

The omens were good. Director Denis Villeneuve gave us probably the best sci-fi film of last year in Arrival and his previous film, Sicario, was a brutal and tense piece of work that boded well for the Blade Runner ethos.

But in a world of CGI the fear was that the raw feel of the original would be lost. Blade Runner was released in 1982, when computer effects were barely possible and prohibitively expensive. Instead, models, studio sets and superb staged environments were needed to evoke the feel of a futuristic world gone mad.

Where CGI is used in the sequel it's deliberately made obvious and enhances the scenes in which it is used. Don't worry that this is going to be an overly fake Star Wars world: what CGI there is enhances the scenes immensely and it's not overplayed for the rest of the film.

Blade Runner 2049: Back to the Future – the movies that showed us what's to come

Much of the film is shot in a grittily realistic style. Its world is a mix of the modern and the decrepit, the high-tech and the painfully old, mimicking the original motif. The debris of the old society mixes with the new and the extreme close-ups of human bodies in all their failings are counterpoised against the smooth perfection of the artificial.

Thankfully, Blade Runner's successor retains much of the atmosphere of the original. Possibly a little too much: the Los Angeles of 2019 isn't accurate to life today and the world of 2049 is also a fast-forward from what we can expect, even if the gloomiest climate predictions come true.

Some of the science is very dodgy but, hey, movies are all about the willing suspension of disbelief.

Nevertheless, the chaos of a disintegrating environment, an unexpected massive data loss (doesn't anyone keep tape backups?), and an uneasily mixed society of humans and replicants in real and virtual worlds provides a fascinating backdrop for what is, in essence, a quest film with lots of surprises.

Ryan Gosling doesn't immediately spring to mind as suitable for the role but he does the job very well indeed, and shows a wry sense of humor at times. He plays a blade runner tasked with "retiring" early-model NEXUS8 replicants that have gone on the run and have no expiry date.

Having been set a search job by his police captain – a hard-drinking cynical chief superbly played by Robin Wright – he uncovers a secret that threatens to tear down the fragile social order. As he progresses further down the rabbit hole he encounters the strange, the ugly, and possibilities of a massive mistake in his perception of the world.

The driver behind this is Niander Wallace, a blind savant played by Jared Leto who saves humanity but may yet destroy it. Sadly we see too little of Leto, who nails the character in all its creepiness but makes the motivations expressed believable.

Plaudits also go to Ana de Armas as the love interest, Joi, and Wallace's assistant Luv, played by Sylvia Hoeks, who is clearly channeling Sean Young but adding a touch of Pris to the character. Edward James Olmos and Sean Young also have cameo roles. But who are we kidding? Seeing Harrison Ford was what many will watch this film for.

If you're expecting lots of Ford screen time, you're in for a disappointment. He is very much a secondary character: old and flabby and spending much of the time in helpless peril. But when given the opportunity, he shows his skills as a master thespian.

These characters are set against the kind of visually stunning land and cityscapes that Scott would have killed to recreate in 1982. While CGI landscapes are there, most of the up-close action is done on physical sets and benefits immensely from it.

The musical score is also crucial to the rhythm and emotion of the film. Hans Zimmer and Benjamin Wallfisch did an excellent job evolving Vangelis' original themes and borrow liberally throughout from the original soundtrack. The final scenes are massively improved by the homage to the original score.

It's worth seeing this on the biggest screen possible and with a Dolby Atmos sound system, or the nearest equivalent, to get the most out of it. Also, empty your bladder beforehand – at two hours, 43 minutes it's a very long time to sit if your back teeth are floating – and you won't be able to leave your seat without missing something important.

If there's one disappointing aspect to the film, it is the pretty blatant product placement. Yes, it's a useful way to raise profits but just for once I'd like to see a film where I'm not constantly namechecking the subliminal adverts.

We're supposed to believe that Peugeot, a company that hasn't made a good vehicle since the 205 hot hatch (and even that was debatable – ed) now makes flying cars people would trust. Similarly, Atari gets a name check, although I'm inclined to believe that, like the Pan Am logo on one building, this was a subtle two fingers to the studio's advertising department.

These are minor niggles. As the credits rolled after a breathtaking last few minutes, the audience seemed stunned before breaking out in applause. Far from ruining the story, or just remaking it like The Force Awakens, Blade Runner 2049 can not only stand up on its replicant legs as a superb film in its own right, but also plays suitable homage to its predecessor. ®