How bad can the new spying legislation be? Exhibit 1: it's called the USA Liberty Act

Freedom doesn't mean what you think it does 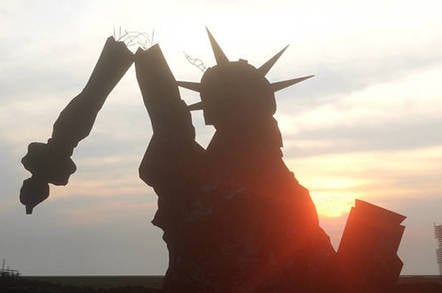 Analysis The US Senate Judiciary Committee has unveiled its answer to a controversial spying program run by the NSA and used by the FBI to fish for crime leads.

It also addresses the biggest criticisms of the FISA spying: that it was being used to build a vast database on US citizens, despite the law specifically prohibiting it; was being abused to do a mass sweep of communications, rather than the intended targeting of individuals; and that there was no effective oversight, transparency or accountability built into the program.

But in case you were in any doubt that the new law does not shut down the expansive – and in some cases laughable – interpretations put on FISA by the security services, you need only review the proposed legislation's title: the USA Liberty Act. Nothing so patriotic sounding can be free from unpleasant compromises.

And so it is in this case. While the draft law, as it stands, requires the FBI to have "a legitimate national security purpose" before searching the database and to obtain a court order "based on probable cause" to look at the content of seized communications, it still gives the domestic law enforcement agencies the right to look at data seized on US citizens by the NSA. And agents only need supervisory authority to search for US citizens' metadata.

That is very, very far from what FISA was intended to do: the clue being in the "F" for "Foreign" in FISA. This legislation would legitimize the highly questionable interpretation that the NSA and FBI decided to place on Section 702: that the information gathered under FISA didn't require another step of authorization to look for American citizens' information – something that many claim breaks the Fourth Amendment on unreasonable search.

This legislative approach lends weight to the argument pushed by the security services in the wake of other illegal spying operations: that metadata is sufficiently innocuous that it does not require legal protections. That is a conclusion that many civil liberties and privacy groups fiercely disagree with.

Wonder why Congress doesn't clamp down on its gung-ho spies? Well, wonder no more

The "safeguards" set out in the proposed law are similar to those introduced to other spying programs: the surveillance services must keep records of their queries and submit to Congressional oversight; and the Director of National Intelligence (DNI) must report to Congress twice a year on the number of US citizens whose communications are collected, and the number of requests that identified US citizens.

Again, though, there is implicit acceptance of the snoopers' questionable assumptions over Section 702 built into this approach. The details on US citizens are referred to as being "incidentally collected" – language that is used by the security services to justify not providing constitutional protections.

There is also precious little evidence that forcing the DNI to provide a report to Congress has a knock-on impact on the spies' accountability or transparency. All it has resulted in so far is the DNI either outright lying to Congress, or pretending to having heard a different question to the one asked.