Yet guilty plea to computer misuse offence costs him £250 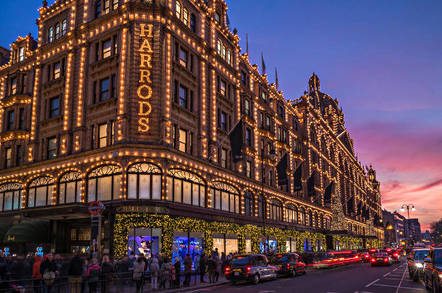 The former Harrods IT worker accused of stealing a laptop from the luxury department store in the UK capital has been cleared of theft – but was fined for trying to remove it from the department store's domain.

Pardeep Parmar, of Grove Road, Hitchin, Hertfordshire, previously pleaded guilty to causing a computer to perform a function to secure unauthorised access to a program or data, a charge under the Computer Misuse Act 1990. Such charges are normally used for serious hacking offences.

The IT worker, who had been made redundant by Harrods, told Westminster Magistrates' Court that he wanted the laptop taken off Harrods' domain in order to access personal files saved on it. One file contained his national insurance number, his solicitor told the court.

Yesterday the City of London Magistrates' Court cleared Parmar of stealing the laptop. The case was adjourned there for its second hearing by Nina Toller, the chairwoman of the three-strong magistrates' bench at Westminster Magistrates' Court, which oversaw the first hearing.

Parmar's solicitor, Sundeep Pankhania of Marylebone law firm HP Gower, told the court at the previous hearing: "As far as the first charge [of theft] is concerned, he denies any dishonest intent."

"Essentially what happened is he worked for Harrods," Pankhania told Westminster Magistrates' Court at the August hearing. "He is made, in short, redundant by Harrods, at a meeting on X day. He's been given two laptops. One is his old laptop but he's also given a second laptop. He has his second at work and returns it there and then. His laptop at home, he doesn't return [it] there and then. They have a lot of personal details on them; it has his National Insurance number on it. He tries to access that laptop when he gets home on X day to delete that but he finds he can't access it.

"The following day, he goes to a computer shop to see if they will access it for him. That's the accessing – the unauthorised access. In short, Mr Parmar says... I want to delete the information that was on it. The issue is a very, very narrow one."

Staff at the computer shop, Cor Solutions, of Hermitage Road, Hitchin, became suspicious when Harrods' logo appeared as the laptop booted up. Court records seen by The Register show that Parmar visited Cor Solutions on February 2 this year.

Crown prosecutor Marie Olo added, at the August hearing: "The Crown's case is that he stole the laptop, which Harrods didn't know he had. He handed one laptop in and he had a laptop at home [and] took it to a repair shop, to allow him easier access. This alerted the shop that perhaps he's not allowed to do this."

While the magistrates were out of court during the August hearing, Pankhania discussed a possible plea deal with Olo. Pankhania said his client could plead guilty to the computer misuse offence in return for the prosecution dropping the theft charge. Olo rebuffed this, later telling the full court: "The Crown's case is he stole the laptop and if it's the defence case that he wasn't dishonest... then in my submission that's a not guilty plea."

The offence of theft requires an intention to "permanently deprive" the victim of their property.

At yesterday's hearing Parmar was fined £135 for the computer misuse offence which he previously admitted, as well as being cleared of theft. He was also ordered to pay £85 in court costs and a victim surcharge of £30, for a total of £250. ®