And a slightly creepy but well-intentioned robo-camera

Google also showed off the voice-controlled Home Max personal assistant, essentially a $399 speaker with two 4.5-inch woofers that the ads giant said is 20 times louder than its existing Home device. The speaker, available in black or grey, is designed for audiophiles and has – you guessed it – machine-learning code in it so that it can configure the best sound for any room. 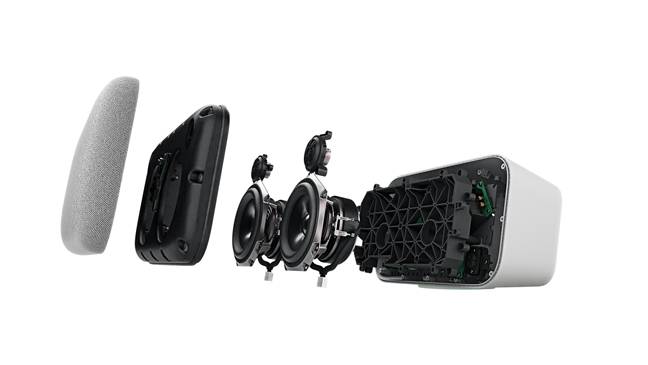 Buyers get one year’s free ad-free music with a subscription to YouTube Red and Google claimed 400 million tracks are up for grabs. It also links to the paid and free versions of spotify and has an audio jack to connect up to traditional hifi systems.

Google also introduced the Home Mini, a hockey-puck-sized version of Home that costs $49 and was given away to attendees. Our tester is putting it through its paces, and we’ll have a review online next week or so.

Isabell Olsson, Google’s lead designer for the Home hardware, said her team went through 159 shades of grey before getting the right choice for the two products – although one journalist suggested they’d picked the ugliest one. The Home Mini is also available in red. 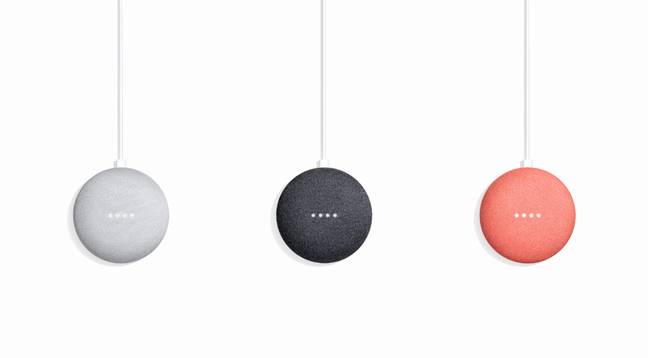 Hardware aside, it’s the software upgrades to the Home family that Google is proudest about. The devices will shortly be able to distinguish individual voices and adapt its actions to suit the person speaking to it.

The example they gave is if someone wakes up and says “Hey Google, good morning” the device will recognize the speaker and give a summary of that person's day, such as their meetings and commute traffic, and so on. Later this year, the software will be updated so that saying “goodnight” will automatically dim the lights, turn on any security cameras specified, and maybe adjust the heating.

There are also some nice features, such as a find-my-phone function that will ring a handset if you can't remember where you left it, and a broadcast feature that will relay the assistant’s voice to every Home unit in the house.

“Parents are going to love this feature,” said Home team lead Rishi Chandra. “Kids are going to hate it, but that’s what makes it useful.”

Later this month Home devices will also gain Family Link user accounts that parents can set up for kids 13 and younger. This will allow the Home unit to recognize a kid's voice and take instructions, with the parents controlling and limiting what their tykes can access. Youngsters can ask a Home unit to play tunes for musical chairs, play animal sound games, and read classic and modern stories for them. Google has also teamed up with Disney so kids can talk to Mickey Mouse, and play Frozen's Let It Go, again and again and again and again.

While this deal does open up a lot of content to kids, Team Rodent has a long record of marketing to youngsters hard. It’ll be interesting seeing quite how this works out, and no one could tell us exactly what information Disney will be allowed to collect from families.

There were a couple of other new devices on show, one a bit meh, and the other potentially creepy.

Google’s VR headset, which needs a Pixel, Pixel 2, Samsung S8, S8+ or Note 8, or LG V30 clipped onto the front, has got a minor upgrade. The viewing lenses have been improved, Google said, and new colored fabrics for the cover.

The other new gizmo is Google Clips, a standalone camera that contains – you guessed it – machine-learning algorithms so it can recognize who to photograph and when. While the $249 camera does have a shutter button to take a snap, it’s designed to take photos automatically all by itself. The AI code is supposed to recognize, say, your family's faces, shoot pictures of them when it thinks the time is right, and it’ll link in wirelessly with a Clips app on your phone so you can see and keep or delete any taken snaps. It's like an electronic photographer quietly taking pics of you doing stuff at home as if it were a robo-biographer.

Here's a video of the thing...

Google stressed again and again that privacy was at the forefront when it built Clips. Nothing goes to Google’s servers until you save the images, and it has a light that turns on so people know when they could be snapped. The purpose of the device is to get rid of one person being the “designated photographer” and missing out on being in the shots. But it seems a very roundabout way of doing it.

Overall, Google can be proud of a lot of the new hardware on show this week. The phones look great, especially with the Buds, and the Pixelbook is a nice addition. The Home devices are well-thought out: a cheap option for beginners and a pricy unit for those that really like their music.

The pitch is that as Moore’s “law” stumbles, hardware updates are going to become less and less of a standout, and software, in particular smart software, is where the innovation is going to be found for the next decade. ®