Dumb bug of the week: Apple's macOS reveals your encrypted drive's password in the hint box 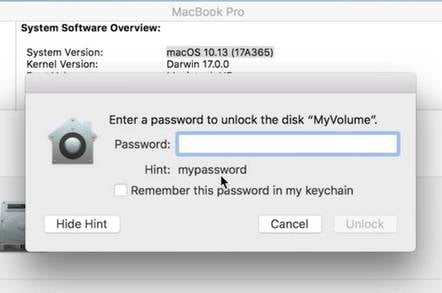 Matheus Mariano, a developer with Brazil-based Leet Tech, documented the APFS flaw in a blog post a week ago, and it has since been reproduced by another programmer, Felix Schwartz.

The problem becomes apparent when you create an encrypted APFS volume on a Mac with an SSD using Apple's Disk Utility app. After setting up a password hint, invoking the password hint mechanism during an attempt to remount the volume will display the actual password in plaintext rather than the hint.

Apple acknowledged the flaw in its patch release notes: "If a hint was set in Disk Utility when creating an APFS encrypted volume, the password was stored as the hint. This was addressed by clearing hint storage if the hint was the password, and by improving the logic for storing hints."

"It becomes clearer every day that Apple shipped #APFS way too early," wrote Schwartz in a tweet on Thursday.

Other coders have said as much. Shortly after Apple released the High Sierra upgrade, aka macOS 10.13, in late September, Brian Lopez, an engineering manager at GitHub, mused via Twitter, "Legitimately wondering of Apple accidentally shipped a pre-release version of High Sierra. So much of it is unfinished and unpolished."

Marco Arment, another developer, suggested Apple's focus on iOS has hurt its quality control elsewhere. "The biggest problem with Apple putting less effort into macOS isn't that it stagnates — it's that they make buggier, sloppier updates," he wrote via Twitter on Thursday.

Asked to comment, an Apple spokesperson directed The Register to its published security update notification and an accompanying knowledge base article. ®