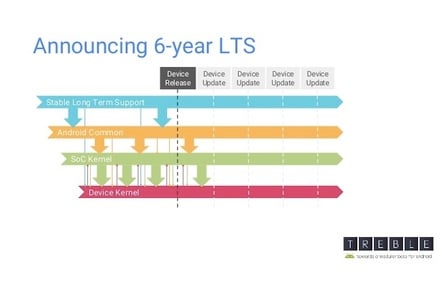 Long-term-support (LTS) editions of the Linux Kernel will henceforth be supported for six years, up from the current two.

News of the extension emerged at the “Linaro Connect” conference at which Googler Ilyan Malchev announced it, saying he had Linux royalty Greg Kroah-Hartman's permission to break the news.

Malchev works on Google's Project Treble, an effort to ease the work required to upgrade devices to new versions of Android. Treble emerged in May 2017, when our own Andrew Orlowski opined that the project “gives Google greater control over pushing out Over The Air updates” rather than leaving them to handset-makers.

In his talk, Malchev explained that silicon-makers have to pick a version of the Linux kernel with which to work, but that commercial necessities mean they may do so knowing that there will be perhaps just a year of support remaining.

“The end result is that LTS cannot cover the device's lifecycle,” he said. “And LTS is where all the critical bug fixes from upstream trickle down.”

“What Google wants to see is when a device is launched it gets upgraded four times to new versions of Android. That is basically the lifespan of a phone, but you get lucky if you get one of these upgrades.”

A six-year support window, by contrast, will mean years of upgradability for Android devices, because each fifth Linux kernel receives LTS status. With the kernel on an eight-week release cycle, that means a new LTS version about every nine months.

The new policy has already been applied to version 4.4 of the Linux Kernel. Android O required at least version 3.18 of the kernel, while Google now insists that new SoCs handle version 4.4.

The next LTS version of the Linux Kernel is, by happy accident, the current version 4.14.

Linus Torvalds wrote that it's proving a tricky one, as the emergence of a LTS release sees developers push to make sure the stuff that matters to them makes it in.

The Linux Lord says rc3 for version 4.14 features three changes he rates “bigger than I would have wished for at this stage” because they “came with cleanups in order to fix the underlying problem” that they address. There's two more changes of similar magnitude coming in this release, but Torvalds is optimistic they'll be sorted out swiftly and allow his preferred seven-release-candidates-and-done release process. ®