Oracle VP: 'We want the next decade to be Java first, Java always'

For perhaps the first time ever, a JavaOne keynote was actually useful 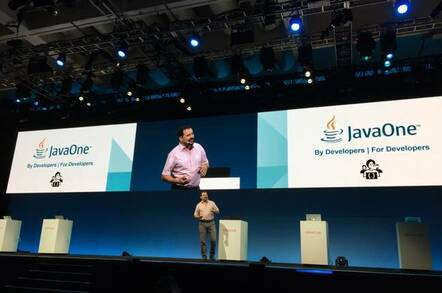 Analysis In the wake of a safe harbor disclaimer insisting Oracle could not be held to anything said during its JavaOne conference keynote on Monday, Georges Saab, veep of software development for the Java platform, talked his way through a Java victory lap.

"Over the past 22 years, Java has grown and matured to the point that the resources are unparalleled in our industry," said Saab.

James Governor, cofounder of consultancy RedMonk, offered support for Saab's assertions. "We generally see Java and JavaScript at the top of the rankings," he said during his turn on stage.

Elsewhere, Python has been deemed to be the most popular and fastest growing language, but such measurements tend to be assailable for some statistical sin.

As if to rebut the notion that Python can compete, Niklas Gustavsson, principal architect at Spotify, showed up to talk about the music streaming site's shift to Java. He observed that while Python was an awesome way to get started, it didn't scale well.

This is in keeping with a claim made last year by Governor that when web companies grow up, they turn into Java shops. In more recent writings about Oracle and Java, Governor disclosed that his company is a client. Make of that what you will.

Java has changed more in the past three weeks than in the past 13 years, said Governor, recalling 2004, when he last spoke at JavaOne.

A few weeks ago, Oracle said it would turn Java EE over to the Eclipse Foundation and shift Java to a six-month release cadence. Provided the handoff occurs in good faith and Oracle isn't tempted to assert intellectual property rights to undermine the arrangement, turning Java into a truly vendor-neutral technology bodes well for all concerned.

Mark Cavage, veep of software development at Oracle, made it clear that the database giant and the Java community would not be resting on their laurels. He acknowledged the need to modernize the language, and reiterated Oracle's commitment to open sourcing everything.

"We want the next decade to be Java first, Java always," he said, even as he allowed that further work would be necessary to keep the language up to date.

Oracle JDK, which has commercial features not found in OpenJDK, will eventually be identical with OpenJDK. "We're going to open source all the features in the Oracle JDK," he said. "There will be zero difference."

Jackie Haynes, representing Goldman Sachs, and Mercedes Alvarez, CTO of PowerWTechnology, representing Jduchess.org, took their moments in the limelight on stage to celebrate Java usage at their respective organizations.

Haynes noted that for her organization's 9,000 global developers writing Java applications, one of the key ingredients for success is the strength of Java's technical specifications.

For Alvarez, Java provided a path to improve the future by bringing more women into the tech industry.

Kingsum Chow, chief scientist Alibaba infrastructure services, added his voice to the Java celebrants by talking up his company's AJDK, a customized version of the JDK, to run more than a million JVM instances.

After reciting the increasingly popular mantra "data is to this century what oil was to the last," Michael Greene, VP of optimization for Intel, turn a turn extolling the value of Intel's hardware with Java.

Get out your specs: Java EE's headed to the Eclipse Foundation

Chad Arimura, VP of product development at Oracle, debuted the Fn project, an open-source container native platform for serverless functions. It allows developers to build serverless functions, initially with Java though other languages should follow, that run in public, private, or hybrid clouds using Docker containers. Fn is mostly written in Go, we note. Earlier this year, Oracle experimented with a container runtime in Rust.

There are actual servers involved, of course, with Fn. The serverless designation is intended to convey that developers don't have to directly manage them, scaling just happens, and resources get billed only when used.

The keynote concluded with Mark Reinhold, chief architect of Java, going over Project Jigsaw, which adds a module system to Java SE Platform and the JDK, the Java reference implementation, and exploring Java features to come.

For those with a taste for Java, it was a pretty good day. Paul Bakker, senior software engineer at Netflix and author of Java 9 Modularity, summarized the presentation via Twitter by noting that the JavaOne keynote was full of relevant and interesting information, for the first time ever. ®