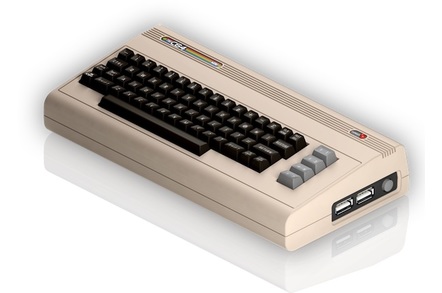 The Commodore 64 is coming back, in a form that owes a debt to both Nintendo's shrunken Mini SNES and thee Vega+ Sinclair ZX Spectrum reboot.

The due-in-early 2018 “C64 Mini” matches Nintendo's plan to shrink an old machine, in this case by 50 per cent. Like the Mini and the Vega+ the revived Commodore will pack in pre-loaded retro games, 64 of them to be precise. The device will also ship with a USB joystick boasting 80s styling, HDMI out so it can connect to modern tellies and USB-mini for power.

Things get a bit weird after that as the company behind the machine, Retro Games Ltd, says “As befits a home computer you can also plug in a standard USB PC keyboard and use as a classic C64 to type in those old BASIC computer listings or program new games.” Yet as the image at the top of the story (or here for m.reg readers) shows, there's a keyboard on the machine.

Retro Games told us it's a faux keyboard by design and "a similar concept to the Nintendo mini units (as in they don't have functioning cartridge slots etc)."

The company says the machine also offers “Accurate C64 operation”, which is to be expected given its apparently a licensed production. You'll also get “Pixel filter options (sharp, CRT, scanline emulation) and Pixel perfect graphics”. A Save Game option has been added, presumably with the help of some built-in memory.

Price has been set at £69.99/$69.99/€79.99 and the machine will “hit the shops in early 2018” with Koch Media handling distribution. There's no hint of crowdfunding, so hopefully the hiccups Vega+ buyers experienced won't be an issue.