Australian mine train capable of hauling 236 carriages and 29,500 tonnes goes 100km without anyone aboard 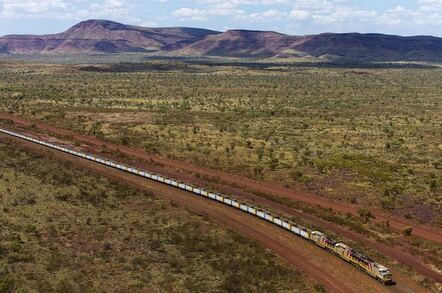 Paraburdoo is a tiny town in Australia's north west famous for being hot, dry, remote … and the site of a rich iron ore mine operated by Rio Tinto, which has just run the first fully autonomous mine train to the town.

Because Paraburdoo is so nasty, few people want to live there. Its remoteness means everyday goods are expensive, which means wages have to be higher to attract workers. 22 per cent of the mine workforce therefore fly in for for a couple of weeks work and then fly home again. Other Rio Tinto mines are in even nastier and more remote places, so their entire workforce comes in by plane.

All of which adds up to a situation where automation is mighty handy. Hence Rio Tinto's Project AutoHaul, which aims to automate the 200 locomotives it operates across 1,700km of track.

The company has run those locos in autonomous mode since 2017's first quarter, but has kept human drivers aboard as failsafes. Which makes sense given the trains can comprise 236 carriages, reach 2.4km in length and around 29,500 tonnes in weight.

The company has now revealed that it's run one of those trains without a driver aboard. The journey was “closely monitored in real-time by Rio Tinto teams and representatives of the Office of the National Rail Safety Regulator, both on the ground and at the Operations Centre in Perth.”

Perth, the State Capital, is just under 1,000km from Paraburdoo as the crow flies. Which makes for a more complicated automation environment than those enjoyed by automated trains in cities, where it's far easier to keep an eye on the planet's many driverless metro trains.

Rio Tinto hopes to automate its entire fleet in 2018. Prepare, therefore, to add “long distance train drivers overpaid as compensation for working in very nasty places” to your list of jobs done away with by automation.

Or as Rio Tinto CEO Chris Salisbury put it, the company is “proud to be a leader in innovation and autonomous technology in the global mining industry which is delivering long-term competitive advantages as we build the mines of the future. New roles are being created to manage our future operations and we are preparing our current workforce for new ways of working to ensure they remain part of our industry.” ®

TL;DR: The engineers realize that human data isn't enough to teach robots how to drive

Not just the vehicle tech but a data marketplace too