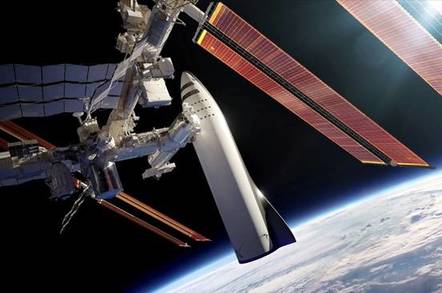 BFR ... Artist's impression of Elon's mighty thruster (the white thing in the middle)

Elon Musk thinks he can get humans onto Mars within the next seven years. On Friday, he told the International Astronautical Congress (IAC) in Adelaide, Australia, how he intends to do it.

Key to Musk's plans is the BFR (aka a Big Fucking Rocket), a 106-metre (348-foot) tall beast slightly shorter than the Saturn V, and 9 metres (30 feet) in diameter. It will be powered by 31 Raptor engines using a mixture of methane and oxygen for improved thrust-to-weight ratios and will be capable of carrying 150 tons of cargo or 100 passengers.

The BFR would be fully reusable. The plan is for the rocket to go into Earth's orbit, divide in two with the upper second stage remaining in space holding a load of fuel while the lower first stage returns to our planet to pick up passengers. This lower stage is refueled on Earth, blasts off with folks onboard, is refueled from the orbiting upper stage once it gets into space, and then takes the trip to Mars. The passenger quarters would be partitioned into cabins and living areas, with a shelter in case of solar storms.

Musk told attendees that the first Raptor engines have already been built and test fired for 1,200 seconds so far. He said that the final rocket could be assembled within a year. By 2022 a couple of test flights would be sent to Mars to scout out suitable landing sites, before a manned mission in 2024 accompanied by two cargo flights bringing supplies.

The bulk of that cargo would be the equipment needed to manufacture fuel to make the trip home. Eventually Musk wants to transport thousands of people to Mars and let mankind escape the surly bonds of Earth.

This is Musk's full presentation to the International Astronautical Congress. Be warned, he has a somewhat jerky speaking style:

Musk also has plans for the Moon. He pointed out that it has been nearly 50 years since man first stepped on the Moon and we still haven't been back.

The BFR would be able to deliver tons of cargo and humans to the Moon, he said, and the satellite's low gravity would mean it would be able to fly back without refueling. Musk, who loves his science fiction, suggested Moonbase Alpha as the name of the colony – probably an homage to the late and little-lamented British drama Space 1999.

Musk also wants to use the BFR to take on the airlines here on Earth. By refitting the rocket for water takeoffs, passengers could be shot from London to New York in 29 minutes and to anywhere on the globe within an hour.

Of course, those places don't have spaceports, so instead the rocket would be launched from floating platforms and passengers would be fired off at 18,000mph to their destination. The flight would be "smooth as silk," because there would be no turbulence, Musk said.

And now the reality

If experience with SpaceX has taught us anything, it's that the company misses deadlines more often than Douglas Adams. They put their first rocket into orbit just nine years ago, the Falcon Heavy rocket is years late from its test flight, and building an entirely new rocket and getting to Mars stretches the bounds of possibility.

Typically SpaceX deadlines are missed by a couple of years, and it's likely to be that way with the BFR. Musk said he wants the BFR to replace SpaceX's existing fleet of hardware – realistically that isn't going to happen any time soon. There just isn't that much stuff that needs to go into space to make it the company's sole launch vehicle.

The 2024 deadline is also likely to slip. It's a good date for a short trip to Mars since the planet will at that time be closest to Earth, but these dates crop up roughly every 18 months.

As for plans to remake long-distance travel here on Earth, that's almost certainly going to take a while. If you thought Uber was having problems starting up in cities like London then imagine the legal hoops SpaceX would have to jump through to set up a rocket passenger service.

Musk's deadlines may be overly ambitious, but his intent is clear and it's obvious that he's determined to make the BFR work. And he's spot-on about one thing – life is more exciting when we look to the planets and make our plans to head there. ®