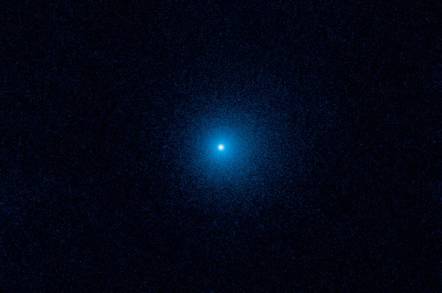 The Hubble Space Telescope has snapped a picture of the farthest-away inbound comet, at a whopping 1.5 billion miles from Earth.

It's a strange find. The comet – codenamed C/2017 K2 PANSTARRS, or K2 for short – has already become active. It is developing a vast 80,000-mile-wide halo of dust as its surface sublimes, despite being so far from the Sun.

A mixture of oxygen, nitrogen, carbon dioxide and carbon monoxide locked on its icy surface is vaporizing into comet dust. Details have been published in a paper in The Astrophysical Journal Letters (here's the free arXiv version).

David Jewitt, lead researcher studying K2 at the University of California, Los Angeles, said: "K2 is so far from the Sun and so cold, we know for sure that the activity – all the fuzzy stuff making it look like a comet – is not produced, as in other comets, by the evaporation of water ice."

"Instead, we think the activity is due to the sublimation of super-volatiles as K2 makes its maiden entry into the solar system's planetary zone. That's why it's special. This comet is so far away and so incredibly cold that water ice there is frozen like a rock."

Unlike most comets, however, K2 doesn't have a tail. It's probably because of its far distance from the Sun, as the forces of radiation pressure and solar wind are too weak to whip particles off the comet and sweep them back into a tail.

K2 was first spotted in May this year by astronomers using the Panoramic Survey Telescope and Rapid Response System (Pan-STARRS) in Hawaii. The iceball was wedged in between the orbits of Saturn and Jupiter, and will make its closest approach to the Sun in 2022. 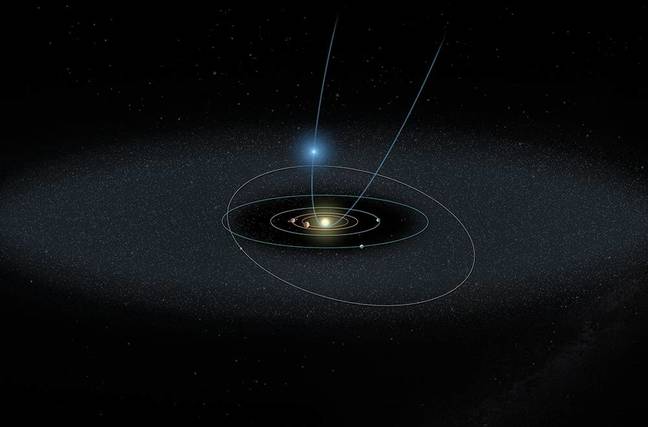 An illustration of K2 comet's path toward the Sun (Image credit: NASA, ESA, and A Field (STScI))

Its position suggests that the comet has escaped from the Oort Cloud, a spherical shell containing bits of floating icy particles and debris left over from the Solar System's formation 4.6 billion years ago.

Further inspection from Hubble revealed that the nucleus of the comet is less than 12 miles across. Scientists believe the dust coma surrounding the comet's nucleus formed years ago. Images taken by the Canada-France-Hawaii-Telescope (CFHT) in 2013 show a blurry, fuzzy extension around K2, but the object was so faint that no one noticed it.

"We think the comet has been continuously active for at least four years," Jewitt said.

"In the CFHT data, K2 had a coma already at 2 billion miles from the Sun, when it was between the orbits of Uranus and Neptune. It was already active, and I think it has been continuously active coming in. As it approaches the Sun, it's getting warmer and warmer and the activity is ramping up."

As the icy clump journeys into the inner Solar System, astronomers will be able to track its movements over the next five years before it reaches the outskirts of Mars' orbit – its closest approach to the Sun.

"We will be able to monitor for the first time the developing activity of a comet falling in from the Oort Cloud over an extraordinary range of distances," Jewitt said.

"It should become more and more active as it nears the Sun and presumably will form a tail." ®