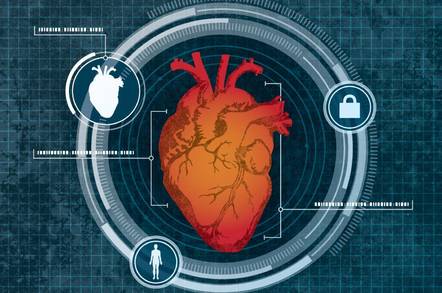 The next form of biometric identification may be a heart scan.

A group of computer scientists have proposed a system called Cardiac Scan, which uses a cheap and cheerful Doppler radar to wirelessly map out the dimensions of your beating heart. They say your old ticker's shape and pulsations are unique, and therefore useful for identifying you, authenticating access, unlocking devices, and so on.

Wenyao Xu, the lead author of a paper on the technique, said on Monday: "No two people with identical hearts have ever been found. And people's hearts do not change shape, unless they suffer from serious heart disease.”

To test their radar design, the team conducted a study of 78 people. Their technology scored a 98.61 per cent balanced accuracy with an equal error rate of 4.42 per cent. Test subjects had to sit completely still in a chair in front of the sensor hardware a metre away during the trials. Random body movements and noise can affect the accuracy of the system. It can fail to work when the signals from “large body movements” cause circuit saturation.

Crucially, it only works properly when the heart is beating, so you can't steal it from a person, or otherwise kill them, and still use the God-given blood pump to authenticate the victim.

The researchers will present their paper at Mobicom, the International Conference on Mobile Computing and Networking, next month in Utah, US.

During cardiac motion, the heart’s atria and ventricles cycle through stages of contraction and relaxation to circulate oxygen-rich blood around the body. Since no two people have the same heart, the exact changes in size and position will be distinct to an individual.

Cops' use of biometric images 'gone far beyond custody purposes'

“Moreover, since cardiac motion is intrinsically connected to multiple biological functions, it is extremely difficult to counterfeit or to be hidden for a living individual,” the paper stated.

Cardiac Scan was developed over three years, we're told. Its Doppler radar takes about eight seconds to complete a scan for the first time; the system then, fingers crossed, later recognizes the heart from this data. The sensor works at a frequency of 2.4GHz, a bandwidth of 5kHz, and a sample frequency of 40Hz. Wi-Fi and Bluetooth signals use the same frequency band but do not disrupt with the system, we're told.

"Though Wi-Fi and Bluetooth also work at 2.4GHz, our cardiac motion signal will not be interfered by them," the paper stated.

Xu, who is an assistant professor at the University of Buffalo in the US, said the team “would like to use it for every computer because everybody needs privacy,” and envisions that the heart scan would replace current methods used to log in and out of networks and gadgets.

It has several advantages over fingerprint, retinal scanning and facial recognition systems, the team reckoned. It doesn’t require direct contact, and it monitors users constantly. If the system detects a different person standing in front of the computer screen, the PC will not operate.

The signal strength of the Doppler radar “is much less than Wi-Fi”, and does not pose any health hazards, Xu insisted. "We are living in a Wi-Fi surrounding environment every day, and the new system is as safe as those Wi-Fi devices," he said.

The researchers hope to miniaturize Cardiac Scan so it can be installed onto the corners of keyboards, as well as mobile phones or even airport scanners. ®