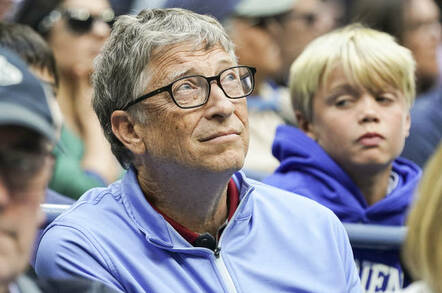 Microsoft founder Bill Gates has admitted to switching to an Android phone but he still won't entertain using the Jesus Mobe iPhone.

With Windows 10 mobile orphaned into the slow lane (it no longer receives the latest Redstone 3 and 4 development in line with the desktop release) and Microsoft not selling own-brand handsets, the ability to run modern mobile apps clearly became too great.

The world's richest man confirmed he only succumbed to temptations "recently" and wouldn't say which Android device he habitually uses.

Almost 20 years ago, Gates regarded the development of the smartphone as a mortal threat to Microsoft. In two anxiety-ridden memos to staff, which subsequently leaked, he predicted the Nokia-inspired Symbian platform would "create proprietary protocols so that other devices have to pay them royalties if they want to interoperate" – and that would be terrible for Microsoft.

Microsoft became so obsessed with losing out that an official transcript famously obliterated the name of Symbian, Microsoft's new competitor.

Microsoft's own stores in the US sell a Galaxy S8 loaded with Microsoft software. Asked specifically, in the interview with CNET, whether he used an Apple iPhone, Gates issued what is known as a "categorical denial".

Years ago we learned that the iPhone was banned from the Gates household.

In 2007, CEO Steve Ballmer predicted the new iPhone would have "no chance" of becoming a mass-market product. How times have changed. Microsoft's current CEO has been seen toting an iPhone on a number of occasions. ®