Particle streams unlikely to come from within the Milky Way 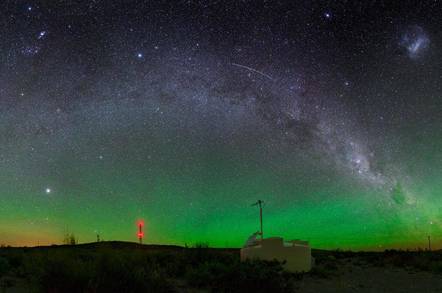 The most energetic cosmic rays bombarding Earth originate from outside our Milky Way Galaxy, according to research published just before the weekend.

More than 400 scientists from 18 countries working under the Pierre Auger Collaboration wanted to solve the mystery of where these special rays – containing extremely rare and ultra-energetic atomic nuclei – come from.

To this end, the boffins combed through twelve years of data collected by particle detectors at the Pierre Auger Observatory in Argentina, according to a paper published in Science [PDF] on Friday.

When highly energetic cosmic rays hit Earth's atmosphere, they create showers of electrons, photons and muons several kilometers wide moving close to the speed of light. These amazing cascades are detected when they eventually reach tanks of water, watched by scientists, as they cause the liquid to momentarily glow blue from Cherenkov radiation. A series of telescopes also observe the faint fluorescence light that accompanies the particle showers in the skies.

After studying years of observations from the Pierre Auger Observatory's water tanks and telescopes, the team found that the cosmic rays do not arrive uniformly from all directions. In fact, most of the particles arrived from a patch of sky about 120 degrees away from the centre of the Milky Way – from an area where the distribution of other galaxies is high.

The likelihood of high-energy particles – and we're talking exaelectronvolt-plus (1 × 1018 eV) energetic, here – coming from our galactic center is low, meaning these powerful cosmic rays are coming from outside the Milky Way.

“Models proposing a galactic origin up to the highest observed energies are in increasing tension with observations. If the galactic sources postulated to accelerate cosmic rays above EeV energies, such as short gamma-ray bursts or hypernovae, were distributed in the disk of the Galaxy, a dipolar component of anisotropy is predicted with an amplitude that exceeds existing bounds at EeV energies,” the paper said.

The exact source of the rare high-energy rays remains unknown. Since the cosmic rays are streams of charged particles, they are deflected by the magnetic fields littering the Milky Way, obfuscating the location of the source. It’s just really difficult to know where these came from.

Gregory Snow, coauthor of the paper and a physics professor at the University of Nebraska-Lincoln in the US, said: "The particles we detect are so energetic they have to come from astrophysical phenomena that are extremely violent. Some galaxies have an explosive, massive black hole in their centers and there are theories that these very violent centers accelerate particles of very high energy that eventually reach Earth."

You can still sleep soundly at night if you're worried about these high-energy cosmic rays. Particles with an energy level greater than 10 EeV, and typically arriving from beyond the Milky Way, tend to hit Earth at a rate of one per square kilometre per year. ®