Heavy-handed tactics during lead up to independence referendum 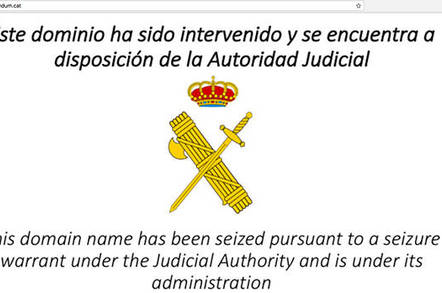 The Spanish government has come under increasing criticism for raiding the offices of the .cat internet registry in the lead-up to a referendum on Catalans' independence.

On Wednesday morning, police entered the registry's headquarters in Barcelona and seized all of its computers. The cops also arrested six members of staff, and held four of them for two days. Its CTO has been accused of sedition.

The raid and arrest has sparked protests from the .cat company, as well as the Internet Society and the EFF. "We do not see it as the expertise and mandate of TLD operators within the internet's ecosystem to engage in monitoring and blocking of content outside of receiving judicial requests related to specific domains," said a post by the Internet Society's European director.

The raid follows a week of political and legal pressure exerted on the .cat registry. On September 15, a Spanish court ordered the biz to take down domains ending in .cat that were being used to drum up support for the upcoming referendum.

The company, PuntoCat, responded by writing to DNS overseer ICANN complaining about political interference. "We are being requested to censor content and suppress freedom of speech in the .cat domain names," its CEO Eduard Martin Lineros warned [PDF]. "This compromises the obligations we have as a gTLD registry operator… may put in jeopardy our position as the steward of the catalan speaking community on the internet."

The .cat registry has over 100,000 names and was added to the internet in 2005. It is unusual in that it is a top-level domain that relates to a geographic region but was created by US-based ICANN, rather than a local government, and so operates under ICANN's rules, whereas other "country code" top-level domains like .uk operates under their own local rules.

But, under the terms of its agreement with ICANN, PuntoCat is obliged to respect court orders from both the government of Spain and the government of Andorra. While many are angered by the court's order to take down .cat domains that carry information on the referendum, it is a legitimate court order.

Governments are extremely sensitive to geographic regions being represented online and in a recent expansion of the internet's name space, such geography-based top-level domains were given special protections: governments were allowed to block specific dot-names if they referred to physical places (the most controversial example of which has been the fight over .amazon).

The bigger issue in this case is the long-running and contentious dispute over Catalonia. The region, in north east Spain, is fiercely autonomous with its own language and customs – and has been fighting for independence from Spain for over 70 years.

In the past decade, those efforts have grown. In 2006, a new law giving the region greater autonomy was passed. But four years later parts of it were ruled unconstitutional.

As solutions to the disputed region turned political and the region started asserting greater autonomy, the president of the Catalonia region announced in June this year that a binding referendum on independence would be held on October 1, 2017.

The referendum has become extremely politically contentious and the Spanish government has aggressively moved to shut down any support for it – leading to the court demand that .cat remove any domains that include information about the "illegal" referendum.

PuntoCat was told to block four main domains, including referendum.cat and ref1oct.cat. They currently display a message from the Spanish military police announcing in Spanish and English that the domain has been "seized pursuant to a seizure warrant." The rest of the .cat registry is responding normally.

The disruption, of course, extends far past just domain names. Spain's prime minister was pulled into the dispute earlier this week when separatists took to the streets of Barcelona protesting the Spanish government's efforts to stop the referendum from taking place. "Stop this escalation of radicalism and disobedience once and for all," warned Mariano Rajoy on TV.

The Spanish police had raided not just the offices of PuntoCat but also a number of regional government offices and arrested dozens of officials in an effort to prevent the referendum from taking place.

That in turn led Catalonia's government to criticize the police raids and the Spanish government for effectively suspending the region's autonomy. The situation also comes at a time of high emotions following the terrorist attack on the world famous Las Ramblas street and market last month. In short, never has Catalonia been closer to independence and at the same time embroiled in massive political and social unrest.

As the online home for Catalans, the .cat registry has been pulled into the struggle – and that may have created a dangerous precedent where an internet registry is targeted and held responsible for the content of websites hosted on its domains. ®