The award for worst ISP goes to... it starts with Talk and ends with Talk

Two other big brands, Sky and BT, also in the naughty corner 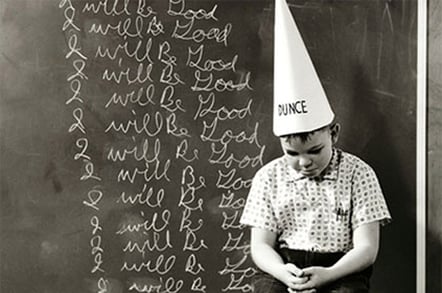 Beleaguered ISP TalkTalk has once again been named worst UK internet provider in a biannual survey of providers by consumer charity Which?

For the fifth time the provider has come out as worst Brit ISP in a poll of 1,700 customers, raking in a satisfaction score of just 40 per cent.

Sky's broadband service comes a place higher and experienced the biggest drop since the last survey in April, earning an overall customer score of 45 per cent, while BT achieved a score of 46 per cent. Meanwhile, tiny ISP Zen Internet once more occupied top spot with its customer service continuing to please its customers.

TalkTalk has been beset with problems over the last couple of years. Following the hack of 157,000 customers' personal details in 2015, the business had to fork out £42m. More recently, the exposure of 21,000 customer records to fraudsters in an Indian call centre resulted in a £100,000 fine from the Information Commissioner's Office.

The biz is now looking to pull out of the mobile market entirely and concentrate on its core broadband offering.

Alex Neill, Which? managing director, said: "Far too many people are still getting a poor deal from their broadband provider. Big players need to improve their service across the board or expect their customers to take their business elsewhere."

A TalkTalk spokesman said: "We strive to give customers the best possible experience. Our extensive investment programme has already led to fewer faults and quicker repair times. Whilst we're very pleased to see this paying off with rising customer satisfaction on TV bundles, we are disappointed by the survey results on broadband. We will continue investing to improve the service we deliver."