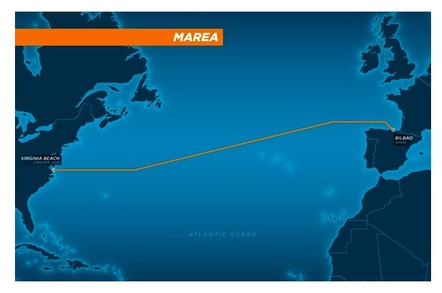 Construction of Microsoft and Facebook's jointly-funded submarine cable has ended.

The two companies, along with construction and operation partner Telxius, revealed the project in May 2016 and promised a 160 terabit per second link across a 6,600 km route linking Virginia Beach, USA, and Bilbao, Spain.

Cable-laying work started five months ago and Telxius said it was landed near Bilbao in July. On Thursday Microsoft declared the cable “complete” after underwater adventures that “required charting a course with average depths of almost 11,000 feet and hazards ranging from active volcanoes and earthquake zones to coral reefs.”

MAREA won't be used in anger until “early 2018” and should run for decades afterwards, because while it contains just eight fibre pairs its landing stations can be upgraded to improve bandwidth.

Microsoft's MAREA page includes a placeholder for a webcast due to kick off at 09:30 Eastern Time, on Friday, September 22nd. Which is 13:30 GMT. Perhaps there'll be more to learn during that event.

For what it's worth, The Register first spotted news of MAREA's completion in a post about new Azure “Availability Zones”. The new offering is an extra-resilient section of Azure bit barns with independent power source, network, cooling so that you can survive data centre outages.

The post also says that MAREA “will help support the growing demand for high speed, reliable connections to the U.S. and Europe, including our newest Azure regions coming to France, and beyond.” Beyond France? Do tell, Microsoft! ®