Ah, good ol' Windows update cycles... Wait, before anything else, check your hardware

Intel and Microsoft have been working together to ease the pain 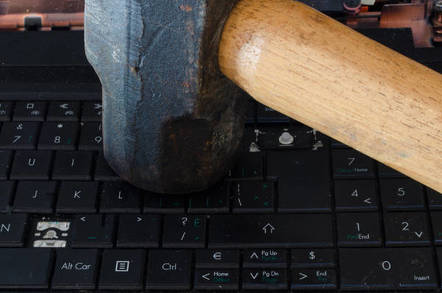 Sponsored Windows 10 means a major shift in how IT operations should perceive and manage Windows and their hardware estate. The most significant is the move away from Big Bang version launches in favour of a subscription model with much more frequent updates.

This has an interesting knock-on effect on hardware requirements. Many organisations time their PC refresh cycles to coincide with those big operating system rollouts. But what now? How can companies ensure that their client devices are not left behind? Intel's answer is the 7th Gen Intel Core vPro processor family, which delivers a "platform of built-in solutions to optimize your Windows 10 investment".

About updates and rings...

The most notable changes in Windows 10 are the way in which the update cycle works, aka "the update rings", and how the OS has become more dynamic and adaptable to the requirements of a highly mobile workforce.

The update rings mean that as new software and hardware features become available, rolling out updates becomes much quicker and simpler.

The old mechanism of releasing major features via service packs meant important features could get delayed until the implementation of the next patch. This was bad for security and performance. The "change hassle factor" that accompanied those major updates meant that new PCs often ran sub-optimal configurations because the "good stuff" – eg, the latest drivers with hardware acceleration – was not available. So, picture this: an administrator purchases a new high-end slate or similar product and applies the corporate image... and all the advantages of the new CPU are wiped out.

With Windows 10, it requires a simple update to the new ring release to get the functionality. Most drivers, especially for CPU features, will be released to most of the rings. Small and frequent updates are the order of the day.

Organisations that get Windows 10 Enterprise can choose LTSB (Long Term Support Base) if they want software fixes only and want to leave aside any new features. Windows Pro still has the update built-in and can't be turned off.

Every administrator knows how disruptive even the best planned and implemented Windows upgrades can be, so before you even think about doing the upgrade, or even plan for it, put aside time to take stock of your current hardware. Put simply, cutting corners doesn't work; don't just think of it as a spring clean but as a chance to revitalise the environment.

Windows 10 is available as a 32-bit download alongside the 64-bit version, but only the truly needy or bonkers should contemplate the 32-bit version.

Any hardware that doesn't run the 64-bit edition should be slung. Modern 64-bit CPUs have many advantages including more advanced in-built security. Yes, some of the features such as ASLR and DEP are available in a limited form on 32-bit systems, but they are much more secure on 64-bit systems. Also, modern operating system apps devour all the RAM they can get. Going sub-4GB on RAM is going to deliver a poor experience. Corporate builds have lots of baggage, as you all know.

Workers these days are highly mobile and the kinds of devices they use are wide and varied. But are these devices up to the job? Your fleet of old laptops may be working "fine" but are they putting a crimp on the workforce? And how easy are they to manage?

Consider the pressure on endpoints caused by the ongoing shift from desktop/on-premises computing to a mobile-first, cloud-first world. As Intel puts it, the "sheer volume of operations needed for analysing, synthesizing, storing and sharing today's complex workloads is unsustainable on old devices and productivity pays the price".

For laptop users, the benefits of the Win 10 and Intel 7th Gen vPro combo translate into straightforward productivity benefits. The platform can extend mobile life to 10 hours, and multitasking is up to 65 per cent faster than on a five-year-old commercial PC, in a SEG572 productivity benchmarking test cited by Intel.

Savvy administrators will know that laptops and tablets can be easily set up for users out of the box – if the groundwork is done in advance. Ever notice that Windows 10 Azure login when configuring Windows 10 devices? The Azure management tools also include, at additional per user cost, lightweight device management. This user management is combined with a locked-down business Windows 10 store with specific applications the users can consume. It also makes license management much, much easier.

Taken one step further, Azure user management can be used to enable federation to consume web applications without the user having to know or remember logins. The administrator can retain the real password and hence keep the corporate Facebook account safe. In short, there are lots of chances to make things work better.

The proliferation of devices and form factors – such as thin and lights and 2-in-1s – across large organisations is a good thing; trying to shoehorn everyone and all use cases into the same make and model is, says Intel, an "approach of the past that actually puts limits on people's productivity".

This makes for an interesting challenge when it comes to hardware management and ensuring software consistency. But what Intel describes as the "profound shift" to Windows 10 brings with it the chance to ensure better standardisation.

The company has designed the 7th Gen Core vPros as a flexible platform for businesses to build, maintain and deploy a standardised Windows image across the network. And it backs up its promise to limit any major changes to platform components and drivers for up to 15 months, by way of the Intel Stable Image Platform Program (Intel SIPP). This is intended to ensure that new devices "avoid incompatibilities between hardware and software, to reduce the costs of validation tests and platform configurations".

To conclude, like it or not, Windows 10 is here to stay, and businesses and their administrators should jump on the bandwagon and just get on with it. More positively, when done right, Windows 10 should mean fewer headaches for the IT department.