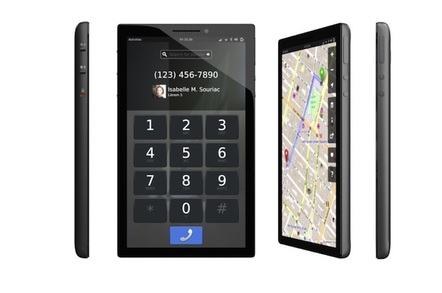 A mockup of the Librem 5 smartphone. Final design may differ

The GNOME Foundation has backed efforts to create a "freedom-oriented" smartphone that protects users' privacy and runs only open-source software.

The Librem 5 promises to run privacy-centric Debian derivative PureOS by default and to support "most GNU+Linux distributions".

Purism, a maker of laptops running PureOS for the privacy-conscious, also promises the phone will be IP-native and allow communication across the Matrix network.

The phone's currently on both the drawing board and the crowdfunding trail. The GNOME Foundation has weighed into the latter, saying the Librem 5 is "a hardware platform the Foundation is interested in advancing as a GNOME/GTK phone device".

Should the crowdfunding campaign succeed, the Foundation "is committed to partnering with Purism to create hackfests, tools, emulators, and build awareness that surround moving GNOME/GTK onto the Librem 5 phone". The Foundation also "plans to enhance GNOME shell and general performance of the system with Purism to enable features on the Librem 5".

At the time of writing the crowdfunding campaign has secured pledges for $561,509, rather short of the $1.5m sought to make the phone a reality. GNOME's backing may speed things up over the remaining 32 days of the campaign.

If you fancy contributing, $299 buys you a development kit that offers the phone's components to play with and $599 gets you an actual working phone.

Librem hasn't finalised the phone's spec, but said it won't get any worse than a five-inch screen, MX6/i.MX8 CPU, 3GB of RAM and 32GB of storage. The device will have a MicroSD slot, front and rear cameras, a 3.5mm headphone jack, 802.11, Bluetooth 4, GPS, accelerometer, gyroscope, an "ambient light" and proximity sensors. USB-C will handle power and connections to computers.

As is the case in Librem's laptops, the device will have a kill switch that turns of its cameras, microphone and all radios.

If all goes to plan, Librem plans to ship the phone in January 2019. ®

Sorry, Linux. We know you want to be popular, but cyber-crooks are all about Microsoft for now