Ethereum just checked that part of a Zcash transaction was legit

Someone sent somebody else some money – that's all we know, and that's a good thing 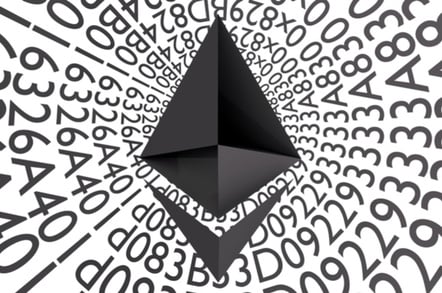 The testnet for Ethereum's next big update has successfully verified an important part of a transaction with the virtual cryptocurrency Zcash, bringing the dream of making the blockchain network more privacy-focused just a tiny bit closer to reality.

In blockchain protocols such as Bitcoin, all the nodes have to validate all the transactions and can see what they are. Unlike Bitcoin, Zcash uses cryptographic tech called "zero-knowledge succinct non-interactive arguments of knowledge" (zk-SNARKs) to let its chain validate transactions that are encrypted, offering additional privacy.

Byzantium is the next major hard fork of Ethereum, which began testing Tuesday. On the same day, a smart contract verified that some sender on the Zcash network sent money to some recipient on the Zcash network, but there is no info about who they are or how much was spent.

That's the zk-SNARK part of the Zcash transaction.

Given the clear advantages, there have been several proposals to tie Zcash's anonymity protections into Ethereum. For example, there's zk-SNARKs in Ethereum, Hawk and the "Project Alchemy" integration bridge idea.

Bas van Kervel, an Ethereum developer based in the Netherlands, told The Register that "verifying zk-SNARKs is a computational heavy task if implemented in pure smart contracts" so the system uses some optimisations behind the scenes. "This is the first step to make projects like [Project Alchemy] possible," he said.

Elliot Shepherd, VP of technology at identitii, which offers a database built on blockchain tech, told The Reg that the validation test is "absolutely significant in a view of how disparate chains could work together".

Eli Ben-Sasson, a computer scientist at Technion – Israel Institute of Technology in Haifa and founding Zcash technician, told El Reg: "The gas [Ethereum transaction unit] cost is quite high, so not sure about the economics of having EVM [Ethereum Virtual Machine] verify zk-SNARK proofs."

Chicago-based blockchain consultant Taylor Gerring told The Register: "As Ethereum is the pre-eminent blockchain for enterprises and developers, it's fantastic to see it continuing to add functionality that will expand the use cases for smart contracts.

"Many businesses thrive on trade secrets which cannot fully be disclosed at risk of losing some competitive advantage," such as supply chains. "ZCash transactions are an important step forward towards the holy grail of decentralisation, scalability, and privacy."

He cautioned that it's not clear if full encryption of all sensitive data on the blockchain would "ever come out of the research phase" because bringing it to life might be a "balancing act" between privacy and scalability.

"Although the future looks bright for adding incremental privacy improvements to Ethereum, for the medium term, developers of blockchain applications will still need to consider externals forms of encryptions like PGP before anchoring data to the blockchain," Gerring added.

At an Ethereum core developer meeting earlier this month, devs decided the Byzantium testnet will run for at least three weeks before the mainnet hard forks. ®