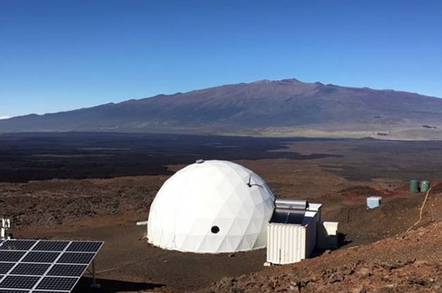 Video Six would-be Mars colonists have emerged from eight months of isolation on top of a Hawaiian volcano as part of preparations for an eventual manned mission to the Red Planet.

The six members of the fifth Hawai'i Space Exploration Analog and Simulation (HI-SEAS) experiment were sealed in a solar-powered geodesic dome with around 1,200 square feet of floor space, one shower and two composting toilets. It is run by the University of Hawaii for NASA.

All communications with the outside world were time delayed for 20 minutes to simulate the distance between the Earth and Mars. The crew had to wear spacesuits or hazmat suits to leave the facility, situated 8,200 feet up on the Mauna Loa volcano. All food was freeze dried, other than those foodstuffs grown in the laboratory.

This HI-SEAS mission was primarily to see how crew members could cope socially with the long confinement a mars mission would entail. Crew had to wear sensors to show where they were at all times, and this would check if they were trying to isolate themselves, or having face-to-face arguments.

For stress relief, the crew was issued with virtual reality headsets that could remind them of other environments besides their somewhat fetid habitat. They could also have delayed conversations with friends and family, but news from the outside world was limited.

"The University of Hawaii is going to be giving NASA essential information about how you pick individual astronauts and how you put them together in a crew, but also how you support them over these long-duration missions," said Kim Binsted, principal investigator on the project.

HI-SEAS is part of the ongoing NASA mission to prepare for a manned Mars landing in the 2030s – funding permitting. Astronauts would have to spend at least eight months getting there and a similar duration coming back, in addition to the mission itself. Finding crew types who won't kill each other en route is going to be key to success.

"We need to send humans out because it's important for the future of the species," said the mission's British science officer, Samuel Paylor. "It's really important to get off Earth – if you look back at the geological records it is just full of mass extinctions."

Once out of the tent, the crew were reunited with friends and family and treated to a feast of fresh fruit and doughnuts. Another mission, with different crew, is currently being planned. ®