Sure, HoloLens is cute, but Ford was making VR work before it was cool 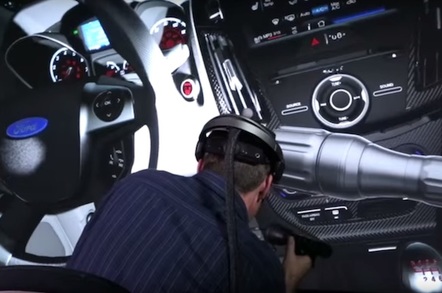 Interview In an era defined by Microsoft, Facebook, Google, Apple and Samsung, it's understandable, easy even, to become complacent and look only to Silicon Valley for tech innovation and leadership. Smartphones, touchscreen, mega search, the app economy... if all these things and more didn't come from a handful of US tech firms, they were certainly popularised and monetised by them.

With virtual and augmented reality, again it's the usual suspects. Microsoft has HoloLens, Apple the iPhone X. Then there's Samsung Gear and Facebook's Oculus.

Except someone else was there first – and not even from a sector you'd normally associate with the words "technology" or "innovation". It was Detroit car maker Ford.

Twenty years ago, automobile design and manufacture used many of the same, slow, analogue processes developed at the beginning of the industrial era – bespoke models, hard to create, hard to change, and impossible to simulate. Gran Turismo wasn't just leading video gaming – it was way ahead of the automakers.

It took a generation for the auto industry to rethink, retool, and redevelop its design and engineering processes to take advantage of the same simulation techniques pioneered in video gaming. But for the indefatigable efforts of one woman, it might never have happened at all.

Now most automakers tout their "virtual" design capabilities, but Ford was there a decade ago. With integration across design, engineering, manufacturing, and even marketing, a global company fabricating a complex product finds itself connected, collaborating and "glued" together by simulation.

Baron getting the gong was unprecedented – and a very public recognition of the value Ford saw in her work (that Baron was the first woman to receive the award made it a touch sweeter).

That award recognised a generation-long effort by Baron to bring simulation into the heart of the automotive industry, a transition Ford's competitors have yet to fully make.

Twenty-nine years ago, however, Baron was a humble programmer analyst at Ford. She worked on Ford's custom-built CAD system – a bit of big iron that helped the manufacturer develop the "digital" vehicle, collating all the data associated with each component. Although useful to the business as a whole, that kind of data collection offered little support or guidance to designers, engineers or manufacturers.

Baron sensed that by placing this wealth of data within realistic simulations, Ford could radically transform their entire manufacturing process, and began a career migration away from CAD towards real-time simulation. By the mid-1990s, virtual reality had gone "mainstream" as a concept, though few organisations (Boeing famously at the forefront) made any real use of it. Promising, sure – but table stakes for VR demanded a graphics supercomputer that cost several hundred thousand dollars.

Having spent the last few years structuring the dataset for these digital vehicles, Baron reckoned the next logical step would be to visualise that data – creating a representation of a car from the underlying data. Although a straightforward concept, the road to its realisation took the better part of 20 years.

Next page: Are they heavy? Then they're expensive
Page:
Tips and corrections
11 Comments