IoT gateways get a benchmark from the TPC

You're going to run a pair of servers to tend 'things' and pre-analyse their data, OK? 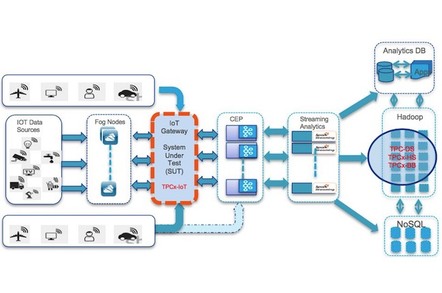 Where the TPC-IOTx benchmark does its best work

The Transaction Processing Performance Council (TPC) has decided the world needs a benchmark for the Internet of Things, or at least for the gateways that will do initial processing of data that things generate.

The new “TPCx-IoT Benchmark” has set records before it's been used in anger: committee chair and Cisco's CTO for Cisco UCS Raghunath Nambiar told The Register the benchmark made it from idea to finished document in 15 months, a new low for the TPC.

The TPC chose to devise a benchmark for gateways because it feels they're the devices customers need to measure, especially in terms of data ingestion rate. The organisation believes that IoT users will operate a pair of gateways, clustered for redundancy, a rig the TPCx-IoT Benchmark Committee settled on after what Nambiar described as “heated debate”. Gateways will sit between things and organisation's data centres. It's expected they'll store incoming data from things, do basic analysis to provide close-to-real-time intelligence, as well as determine what data is worth sending to more powerful servers for deeper analytics.

The new benchmark is also seen as complementary to the TPC's big data benchmarks, which it expects will be employed to scope systems that do the heavy lifting on data that passes through gateways.

The “x” in “TPCx-IoT” indicates it is an “express” benchmark, meaning the spec and software to run it will soon be available here

TPCx-IoT assume gateways use x86 processors and run Linux, but Nambiar told The Register the benchmark could be adapted to other operating systems and hardware. ®

GPU-makers aren't members of the TPC. Will they join?