IN ALL CAPS, no less 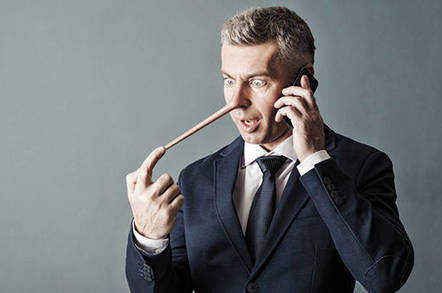 It has long been a frustrating marketing ploy pushed by mobile phone operators: claiming that they offer better network coverage and speeds than their competitors.

But someone has finally gotten fed up with it: the CEO of Sprint, the perennial fourth placed US mobile market.

"AS A PUBLIC COMPANY CEO HE HAS TO STOP LYING," bellowed Marcelo Claure on Twitter in response to a televised interview with his rival, Lowell McAdam. "Check out Verizon CEO lying about competitors' performance in Houston."

Claure then linked to the video in which McAdam was asked about how Verizon was planning to respond to competitors offering free or discounted access to Netflix and DirectTV as a way of enticing them onto their networks.

"You don't have to give away something that has value in order to sell your service," McAdam argued, before pushing the long-held sales pitch that Verizon has a better, more robust network.

"Let me give you the comparison to Houston," he continued. "When that hurricane came ashore, we lost less than two per cent of our cell sites; some of our competitors said publicly that 75 per cent of their network was down. This is where advertising claims meet reality."

It's not clear where McAdam got his 75 per cent figure. According to US broadband watchdog the FCC, the greatest impact of the storm was when 364 cellular towers out of 7,804 across the region impacted went down – or roughly four per cent.

The biggest impact was where the hurricane hit land first, bringing with it massive winds and flooding. And in those coastal counties of Refugio and Aransas, between 85 and 95 per cent of all cellular towers were down. Houston was also badly hit when the storm moved back out to sea and then came back inland again.

So it seems likely that McAdam decided to use a region-wide percentage cell site failure figure for Verizon and then in the same sentence switched to using a Refugio and Aransas county-only figure for his competitors. Which would be the opposite of what he claimed: that here was where "advertising claims meet reality."

This is not the first time that Verizon's competitors have been angered by its claims of a superior network.

In response to a Verizon television ad late last year that showed colored balls rolling around a track, in which the company claimed to have a larger, faster network than AT&T, T-Mobile or Sprint, both T-Mobile and Sprint ran response ads using the same approach in which they argued Verizon was not giving the full story.

The Verizon ad used a study by Rootscore that awarded it 253 "awards" for overall network coverage compared to 95 for AT&T, 25 for Sprint and 0 for T-Mobile.

But mobile execs pointed out that while Verizon still has the edge in terms of its network, the same study also shows that the disparity between the networks is minimal and would not be noticed by the vast majority of consumers.

T-Mobile's CEO John Legere went further and accused Verizon of using "old, incomplete data." And both Sprint and T-Mobile pointed out they were expanding their networks much faster than Verizon and were using new technologies that offered faster speeds.

There is another reason to doubt Verizon CEO McAdam's veracity: while claiming that "you don't have to give away something that has value in order to sell your service," he conveniently ignored that fact that Verizon has repeatedly used free or discounted access to HBO as a promotion for new customers. ®