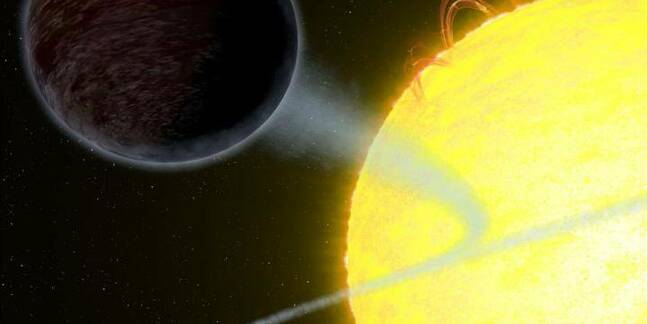 Scientists studying WASP-12b, an exoplanet 871 light years from Earth, have determined that it reflects almost no light, making it one of the darkest planets in space.

The team has published their results in a paper in The Astrophysical Journal on Thursday. The Space Telescope Imaging Spectrograph on board the Hubble Space Telescope was used to measure the light reflected from the planet, a property known as "albedo." Light enters the spectrograph through a camera lens, and it’s split into a frequency spectrum.

Taylor Bell, lead author of the paper and a Master’s student in astronomy at McGill University in Montreal, Quebec, Canada, said the results were surprising. “The measured albedo of WASP-12b is 0.064 at most. This is an extremely low value, making the planet darker than fresh asphalt!"

Albedo is measured on a scale from zero – a pristine black body that absorbs all light – to one – a perfect white body that reflects all light. WASP-12b is about two times less reflective than the Moon, which has an albedo of 0.12.

Since its discovery in 2008, WASP-12b has become one of the most studied exoplanets and has a range of strange properties. It orbits its parent star WASP-12a – a dwarf star with a similar mass and size as our Sun – very closely, at a distance of 3,403,762 kilometers (2,115,000 miles). It is approximately 44 times closer to its star than the Earth is to the Sun.

The close proximity means the strong tidal forces exerted on the planet stretch it out to an egg shape and heat its surface up to 2,600°C (4,712°F). It also has one of the lowest densities, and size and mass similar to a gas giant, making it a "hot Jupiter."

Scientists aren’t completely sure why WASP-12b reflects so little light, but its high temperature is the most likely explanation. "There are other hot Jupiters that have been found to be remarkably black, but they are much cooler than WASP-12b. For those planets, it is suggested that things like clouds and alkali metals are the reason for the absorption of light, but those don't work for WASP-12b because it is so incredibly hot," said Bell.

The side that receives the most light reaches temperatures that are too hot for clouds and alkali metals to form. Molecules absorb the energy and are ionized; hydrogen molecules split up into atomic hydrogen in its atmosphere, leading to a low albedo.

WASP-12b doesn’t look completely pitch black, but its hot temperature means that it glows slightly red like hot metal. It’s also not the darkest known exoplanet – that award goes to TrES-2b, another hot Jupiter, which has an albedo of 0.0136.

Hot Jupiters are rare, and not all of them have low albedos. The researchers compared the results for WASP-12b to exoplanet HD 189733b, and found that it reflects an azure blue color like Earth.

"The fact that the first two exoplanets with measured spectral albedo exhibit significant differences demonstrates the importance of these types of spectral observations, and highlights the great diversity among hot Jupiters," said Bell. ®

Not boldly seeking out new worlds, mostly checking out the ones we know

Fomalhaut b exoplanet may have been cloud in a trench coat: Massive 'world' formed after 'mid-space super-prang'