Scientists produce a map marking water hotspots on the Moon

Just landed on the Moon and fancy a drink? Step on up 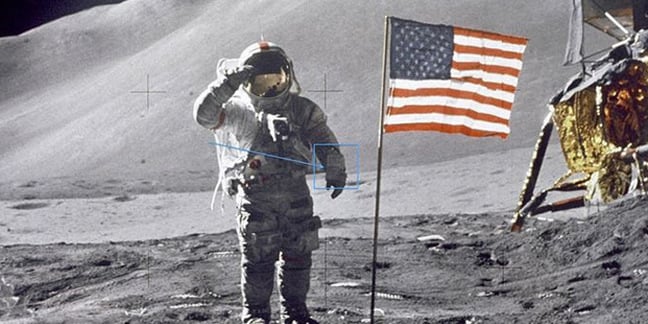 Scientists have created the first map that traces the water content on the surface of the Moon, in the hopes that it may come in handy for astronauts searching for drinking water or fuel.

A paper published in Science Advances on Thursday shows how scientists used data taken from NASA’s Moon Mineralogy Mapper (M3) – an imaging spectrometer onboard the Chandrayaan‑1 probe – to sniff out water molecules.

In 2009, M3 discovered hydroxyl molecules containing one oxygen and one hydrogen atom and water in the soil. By plotting the abundance of hydroxyl concentrations across the Moon’s latitude, researchers from Brown University in Providence, Rhode Island, can provide a map of the water levels on the satellite.

The Moon is incredibly arid compared to Earth. Nearer the poles, the maximum average of water is only around 500 to 750 parts per million – less than the amount found in Earth’s driest deserts.

Shuai Li, lead author of the paper who is now a postdoctoral researcher at the University of Hawaii (but was a PhD student at Brown University at the time of the study), said: “The signature of water is present nearly everywhere on the lunar surface, not limited to the polar regions as previously reported. The amount of water increases toward the poles and does not show significant difference among distinct compositional terrains.”

Although the map shows a small concentration of water, the scientists still think it can be useful for astronauts thinking about drawing the liquid up from the soil.

A map showing water content on the Moon. It is wetter toward the poles and drier toward the equator. The dots mark the Apollo landing sites

Ralph Milliken, co-author of the paper and an associate professor at Brown, said: “This is a roadmap to where water exists on the surface of the Moon. Now that we have these quantitative maps showing where the water is and in what amounts, we can start thinking about whether or not it could be worthwhile to extract, either as drinking water for astronauts or to produce fuel.”

“It remains to be seen whether extraction could be feasible. But these results show us what the range of water availability across the surface is, so we can start thinking about where we might want to go to get it and whether it makes economic sense to do so,” he added.

The map also helps scientists work out the source of the water. The distribution is mostly uniform, with levels decreasing from the poles to the equator. It’s a sign that most of the hydroxyl and water molecules are formed from the particles scattered by the solar wind billowing from the Sun.

There are also pockets of water concentrations near the equator, which scientists believe come from within the Moon’s mantle and that rose to the surface as magma.

The amount of water also changes throughout the day. In the mornings and evenings, lunar soil is much wetter, but gets drier during the afternoons. It’s proof that the Moon is a dynamic system, but Milliken said the mechanism for this fluctuation remains unknown.

“But it tells us that the process of water formation in the lunar soil is active and happening today. This raises the possibility that water may re-accumulate after extraction, but we need to better understand the physics of why and how this happens to understand the timescale over which water may be renewed.”

It’s not clear exactly how much water exists on the Moon. There are regions that are hidden from the Sun’s rays, and the M3 cannot measure those areas because it relies on measuring the amount of light reflected off the Moon’s surface to detect minerals.

The darkened areas may hold large beds of ice. “Those ice deposits may indeed be there,” Milliken said, “but because they are in shadowed areas it’s not something we can easily confirm using these data.”

“We’re only sensing the upper millimeter or so of soil, and we can’t say for sure what the water content is like underneath that. The distribution of water with depth could make a big difference in terms of how much water is actually there,” he added. ®

If you want to take social distancing to the next level, and go to the Moon, take this: A complete lunar geology map