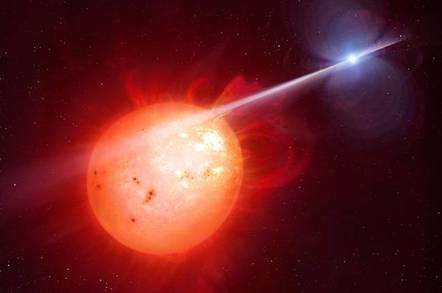 Scientists trying to crack the mystery behind the fastest-pulsating white dwarf have found that its brightness levels change over a timescale of decades.

It was first discovered by a group of amateur astronomers, who spotted a strange object flashing quickly. AR Sco was believed to be a single variable star, but further observations revealed it was a completely new type of system often described as a white-dwarf pulsar.

Every two minutes, the magnetized star emits a stream of particles and radiation that appears like flash beams of light, directed onto its neighboring red dwarf. It completes an orbit about every 3.5 hours, and is roughly the size of Earth but has a mass 300,000 times higher. It is estimated that if you scoop a teaspoon of AR Sco’s matter, it would weigh 15 tons.

Scientists are at a loss trying to explain how the strange star musters up the energy to pulse so frequently, and how it interacts with its companion star.

A group of researchers has attempted to study the binary system by analyzing data gathered by the Kepler Space Telescope’s K2 mission and a sky survey covering the star over a decade from 2005 to 2016. Their results have been published in The Astrophysical Journal Letters.

Peter Garnavich, co-author of the paper and a physics professor at the University of Notre Dame in South Bend, Indiana, said: “One model of this system predicts long-term variations in the way the two stars interact. It was not known what the time scale of these changes might be – whether 20 to 200 years. By looking at the K2 and archival data, we were able to show that in addition to hourly changes in the system, there are variations occurring over decades.”

The light curve of the white dwarf shows a spike every two minutes, and a puzzling variation in brightness over the orbital period.

Colin Littlefield, co-author of the paper and a researcher also at the University of Notre Dame, said they found that “12 years ago, AR Scorpii’s peak brightness came a bit later in its orbit than it does now.

“This does not solve the mystery, but it is another piece to the puzzle that is AR Scorpii.” ®

Pulsating white dwarf described as a 'dynamo' found, no, not in the back pages, 380 LY away

Astroboffins have searched for magnetic neighbor for 50 years