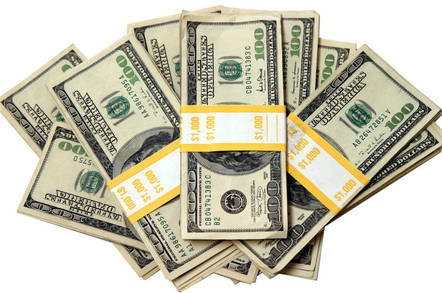 +Comment Cloud storage gateway business Nasuni has picked up $38m in extra funding to boost research and development, customer success, and go-to-market efforts, taking the total raised to around $120m.

Here is what we know of Nasuni’s funding progress:

The investment was led by Goldman Sachs Growth Equity (GS Growth), a platform within Goldman Sachs’ Merchant Banking Division. David Campbell, the MD of that division, joins Nasuni’s board and has a canned quote justifying Goldman Sachs involvement: “The cloud is replacing on-premises disk arrays as the next wave of data storage. What has been missing is a global file system that enables enterprises to store their fastest growing type of data – unstructured file data – in cloud object storage.” Nasuni’s UniFS file system provides it.

Andres Rodriguez, Nasuni founder and CEO, had a canned quote too: “The last decade has seen only incremental innovation in file system design. Traditional storage software and hardware vendors have viewed the cloud largely as a "cheap and deep" target for backup and archive data, so they have perpetuated unscalable, device-centric architectures. Our disruptive approach of making the cloud the target for primary file storage as well as the hub for high-performance file distribution is now meeting the NAS scale and performance requirements of the most demanding media, manufacturing, engineering, technology, and construction companies.”

It says the funding follows another record quarter for new customer acquisition, expansion bookings from existing customers, and revenue. President Paul Flanagan said: “Now, it’s about driving growth and scale in our business.”

But last year Nasuni raised $25m, so why does it need more now?

Chief marketing officer Tom Rose told us: “We were not actively fundraising and had no plans to raise more capital until later this year or early next. Recent additions to the management team and increasing momentum in the business (which you covered a few months ago) resulted in internal conversations that led to willingness to take on additional investment now. Nasuni has doubled in size four years in a row and has solid operating metrics.

“This growth has been driven in part by more enterprises thinking cloud-first when they consider their IT infrastructure needs. Additionally, our cloud partners are putting more emphasis on moving data out of the data center and into the cloud. Things seem to be lining up. Goldman Sachs saw this same alignment, and felt there was an opportunity to invest now and help us accelerate our technology and revenue growth.”

We asked Tom Rose if the new funding was anything o do with Panzura having a $32m round earlier this year. “No. We’re increasingly displacing EMC Isilon and NetApp and seeing less of Panzura. But regardless of who the competition is, we believe we have a unique innovation in our cloud-native file system, UniFS.

"This innovation at the core of the Nasuni platform is enabling us to deliver tremendous cost savings and productivity improvements to our enterprise customers, and is helping our object storage partners such as Microsoft, IBM and Dell EMC ECS drive consumption of their clouds. Our sole focus is to continue delivering this value, become cash flow positive in 2018, and build the next great data management company in Boston.”

Very bullish, Mr Rose. Cash flow positivity in 2018 could be followed by an IPO perhaps, with Nasuni passing through its own public ownership gateway. ®