Chill out about net neutrality, says FCC head, because mobile phones are great

All just part of a broader strategy 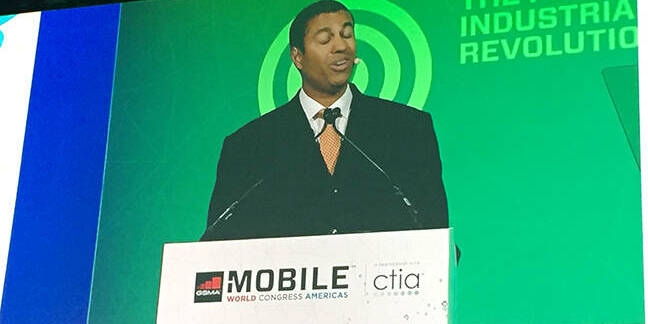 Which is pretty remarkable given that it is pretty much the only issue that people outside the telecom policy bubble care about.

In fact, if you didn't know that the FCC has called its effort to unravel its own rules about internet access "restoring internet freedom," you could well have sat through the keynote and never known that Pai holds in his hands the future path of the internet in the United States.

"The FCC is currently examining whether to change the regulations," he noted. "The CTIA has expressed its concerns about them ... there have been a lot of comments ... but we shouldn't view it in isolation, it's just part of a comprehensive strategy ... for expanding next-generation networks."

And then he moved on to talking about spectrum.

The strange thing is that while Pai is understandably nervous about even saying the words "network neutrality" given the enormous and widespread support for the concept – even at the Mobile World Congress – the rest of his keynote revealed something interesting and worrying.

The chair of the FCC doesn't really know anything about the internet.

That may seem like a crazy statement, given that the internet is by far the most important communications network of the modern era and that Pai will personally be deciding how it will be defined in law later this year.

But throughout the course of his keynote, it became clear that Pai – a lifelong mobile industry staffer – sees the internet solely through the lens of mobile networks.

Forget the ARPANET, Vint Cerf and TCP/IP; forget packet switching, fiber and RFCs; because the guy in charge of the federal telecom regulator sees only 3, 4 and 5G, spectrum allocations and mobile phones.

Admittedly, he was on stage at the Mobile World Congress, but the contrast between when he was talking about mobile networks and discussing anything else was jarring.

Pai opened his keynote talking about how wireless networks had saved the day in Texas with the recent hurricanes. Just five per cent of cell sites went down – providing much-needed communication to people trapped and struggling.

He then embarked on an explanation of how the first iPhone was not in itself a success because it didn't offer 3G data. And then some detailed facts about mobile markets: the rise in consumer demand, the increasing usage of mobile data, the cost per megabyte, the speeds of LTE.

Pai was supremely comfortable with all of this information. His depth of knowledge was obvious and he was comfortable on stage.

He then talked about getting internet access to rural areas. But solely in terms of mobile phone access. He drove from Houston to Austin last week, apparently – and hit a dead spot on the way. He told a story about a woman who had died, and when found it was determined that she had tried to call 911 no fewer than 38 times, but couldn't because her call couldn't get through. It seemingly never occurred to Pai that a landline was likely the answer.

And then he got stuck into mobile network expansion. Billions in funds redirected by the FCC, but a worrying reduction in investment by private companies in 2016 – down nine per cent according to Pai (others dispute that figure).

And that claimed reduction in investment was the segue to the very brief mention of an internet that isn't about mobile networks. And to the enormous, career-defining decision that he will soon make about net neutrality.