What's a storage burrito, you ask? Why all the newsy tidbits chopped, cooked and wrapped up 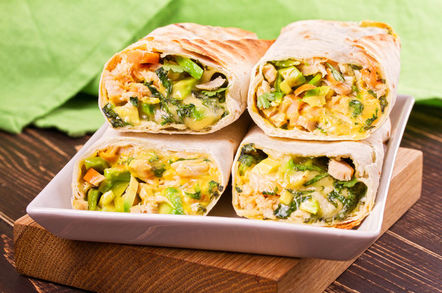 +Comment Good morning, storage fans. Last week we were buzz-bombed with a barrage of storage updates, but we kept quite a few aside to wrap up into something easily digestible. It's a bit more substantial than the blob-dropping treat you might grab at the food truck, though, so get a napkin, plate, and some cutlery, find a quiet room and spend 15 minutes ingesting this stuff.

Mediaflex-UMS workflows will add metadata to any Concurrent media storage object, which Aquari will protect throughout the media asset’s lifecycle.

An integration is currently in development which will allow Mediaflex-UMS to access Concurrent Zephyr, scale-out transcoding software running on the Aquari platform. This enables TMD to offer an integrated solution as an on-premises, software-as-a-Service (SaaS) platform or on a pay-as-you-use basis. With Concurrent transcoding, TMD will spin up the service as an agile, software-defined workflow solution, with the user paying only for usage.

We hear the company is developing a cold data disk storage product. It believes that restoring data from tape is too slow.

We guess good performance enhancing news is coming, and we’ve been given a performance summary of what Spectrum Scale, which started out on August 26th, 1997, can do with a new single box all-flash array - ESS GS4s:

In an investor call Micron SVP and CFO Ernie Maddock talked about Micron and storage and exec changes following on from Sanjay Mehrotra becoming Micron’s CEO, coming in from SanDisk.

Maddock said: “The background and experience that Sanjay brings to the table together with some of the folks that Sanjay has brought into the company, really will be helpful to us in accelerating our penetration of the storage market for example, which is something that we have done a good job starting.

“And I think that the expertise has been brought into the company will help us accelerate that transition. I think there is a level of structure and urgency and discipline that comes with a transition to a new leader that is also very helpful to the company.”

He was asked to expand on that and so he did: “Micron has had a stated objective around first getting our technology competitive and we certainly believe we have competitive technology and then penetrating the storage market with a broad family of SSDs and particularly SSDs that address the enterprise space.

“That is an area where Micron had made some inroads but with the experience and talent and capabilities that Sanjay brings as well as Jeff VerHeul and Sumit, we think we're going to be able to make progress there faster and that's an important strategic thrust for the company and we believe that with the capabilities that now exist within the company, we're be able to more effectively capitalize on that.”

Maddock said: “That is an area where Micron had made some inroads but … we think we're going to be able to make progress there faster.” In other words Micron hasn’t made sufficient progress and Mehrotra wants it to move faster. This is the background to Darren Thomas leaving the VP Storage Business Unit role after Mehrotra became CEO.

Jeff VerHeul is SVP for non-volatile engineering and Sumit Sadana is EVP and chief business officer. Anand Jayapalan, reporting to Sadana, is the new VP of the Storage Business Unit. Both he and VerHeul are ex-SanDisk execs and Mehrotra hires.

NetApp has a new tag line, calling itself the data authority for hybrid cloud, which makes a change from being the leading something or other.

It says it is delivering industry-leading post-production and VFX house performance and scalability to visual special effects company Framestore.

NetApp tells us Framestore uses the kit in its “integrated advertising division, which encompasses VFX (200 2D and 3D artists), finishing (19 suites), and rendering (a 7,200-core render farm). The performance of the system, in both video bandwidth and IOPS, enables all three of these workloads to run full out with no negative effect on the finishing editors’ or graphics artists’ user experience. This capability is revolutionary within an industry that traditionally partitions off these three workloads to keep the artists from grinding to a halt.”

It’s for both enterprise IT departments and small and medium-sized businesses.

The press release batters us with features, so we’ll batter you with them too: “OnApp Enterprise includes a full suite of private cloud deployment and orchestration tools; user management, access control and governance tools; metering, monitoring and showback/chargeback capabilities; connectivity to multiple public cloud providers; a truly scalable software-defined architecture with up to 254 servers per cluster and fully asymmetric storage and compute; and a single UI for private and public cloud management across multiple clusters, data centres and clouds.”

We’re told it’s available at as little as a third of the cost of competing products, and you can buy it from Iron Systems in the US, New Era Informatique Pvt Ltd in India, MultiTech in Argentina and Uruguay, Colsof in Colombia, Rectron in South Africa, and Hammer in Europe.

If you don’t know who or what OnApp is then read on: OnApp launched in July 2010. Its cloud platform enables hosts, telcos and other service providers to sell a range of Infrastructure-as-a-Service products. More than 3,500 companies in 93 countries run their cloud services on OnApp software.

Panasas will demonstrate an acquisition-to-post-to-delivery workflow, featuring its ActiveStor storage with DirectFlow for Linux and Mac, at IBC 2017, RAI Amsterdam, Stand 8.C07.

Panasas says this will show the “Fastest in Hollywood” media production experience.

It quotes Gartner Research Analysts Ehtisham Zaidi, Mark A Beyer and Ankush Jain, as saying:  “Organizations are expanding their use of data virtualization beyond ‘limited’ development/test type deployments and are now using it as a real option for data integration for enterprise-class products. Through 2020, 50 per cent of enterprises will implement some form of data virtualization as one enterprise production option for data integration.”

By 2018, Gartner estimates that organizations with data virtualization capabilities will spend 40 per cent less on building and managing data integration processes for connecting distributed data assets. With cloud adoption on the rise, enterprises need to ensure that adding cloud resources does not create a new island of storage that is disconnected from the rest of the enterprise’s infrastructure.

This all-flash array company has a new guarantee: the “Love Your Storage Guarantee”. It says it guarantees customers will love its storage products or they can return it for a full refund.

Pure says that, in 2016, it earned a Satmetrix NPS score of 83, making it “the number one recommended technology vendor by a huge margin – for context, Apple iPhone scored a hugely successful 63.” Find details here.

It comes as a 3U box, with Quantum's QXS disk storage chassis and Workflow Director appliance, which provides NAS connectivity and support for billions of files across up to 64 virtual file systems. It includes the the StorNext v6 shared file system and data management platform.

The product comes standard with 48 TB of raw capacity, and users can upgrade to 72 TB or 96 TB. Connectivity is via dual 10 GbitE or optional 40 GbitE, and NAS protocol support is included with no per-seat licensing. The thing costs under $25,000.

Quantum says it provides a more powerful and feature-rich alternative to other entry-level storage systems at a similar price point.

The product will be shown at IBC 2017, Sept. 15-19, in Amsterdam (Stand 7.B27), and the new appliance will be generally available through Quantum and its reseller partners later this month

Data warehouser in the cloud biz Snowflake says Capital One Growth Ventures has joined D-round of growth funding, punting in $5m and bringing the round total to $105m, and total funding to $210m.

It’s also announced a Virtual Private Snowflake (VPS) with additional security for industries such as financial services. Capital One has been working on VPS and is the first customer.

The auction of Toshiba’s Memory Business seems to be heading for beyond-crazy territory now, with Apple and Hon Hai (Foxcon) making a last-minute bid.

Some Toshiba board members are backing a HonHai bid despite the danger of IP and jobs leaking into China against the wishes of the Japanese government.

Toshiba is said to be planning to build a new chip plant in north Japan after it has sold its Memory Business and, hence, its interest in the flash foundry joint ventures with WDC.

SanDisk and Toshiba worked happily together for years. Then WDC buys SanDisk, Toshiba gets into crippling financial trouble and it all goes down the toilet.

Ex-SanDisk CEO Sanjay Mehrotra, now ensconced in the head exec chair at Micron, must be shaking his head.

Backup supplier Acronis has promoted chief marketing officer John Zanni to the role of president, with Gaidar Magdanurov becoming the new CMO, adding Zanni’s former responsibilities to the existing portfolio of managing the consumer online marketing organisation. He was previously the VP and general manager of Consumer and Small Business.

Storage Made Easy has appointed Kamran Yousaf as chief technology officer. Yousaf was one of the original founding team at Storage Made Easy and has spent a year away from the business. The company says he will drive strategic analytic and compliance initiatives to maximise Storage Made Easy’s impact with customers and prospects.

That’s it for this week, storage junkies. Tune back in after seven days have elapsed for another weekly fix. ®