Fast book delivery is a first world problem, but cargo-carriers might just slow down the growth of cities 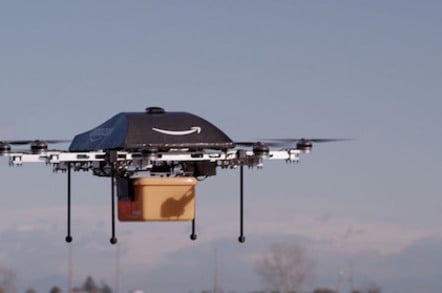 Amazon's Prime Air drones. Launched in 2013, not much more than hot air since then

At the end of 2013 (the world seemed much simpler back then) Amazon CEO Jeff Bezos gave a rare interview to CBS’ 60 Minutes program during which he revealed - with an almost Jobsian flourish - an autonomous deliver drone that would drop packages on customers' doorsteps 30 minutes after they pressed the ‘buy’ button.

Like most of the future, the idea landed with a thud of nervous laughter - and some openly questioning about whether Bezos's brain was working on all rotors.

But the future often starts out looking a lot like an expensive and somewhat impractical toy. Drones have followed the same well-trodden path of personal computers and smartphones before them: from expensive and rare to common and cheap - and increasingly more capable.

For many, drones will be a lifeline connecting them to a world recently beyond their reach

It’s been noted that as soon as we could cram enough transistors onto a CPU to give it the same brainpower as an insect, we got drones. In the latest feat of biomimicry, these drones not only stabilise themselves, they operate autonomously, using GPS and dead reckoning to fly between locations. No human pilots - so no human lives at risk.

While it seems likely folks in bigger cities will have their prescription drugs and other lighter items flown across town, there’s a flight-to-weight ratio that will make payloads of more than a few hundred grams impractical for most intracity drone transport. We won’t tolerate large, loud drones filling our skies day and night.

But it’s clear the real game isn’t getting your latest gadget directly from Amazon’s robotic warehouse in less than 30 minutes - it’s opening up the rest of the world.

Consider Papua New Guinea. One of the least urbanised nations in the world, with roads that, according to residents ‘go nowhere’, often not even connecting to other roads. The central Highlands - the last place on Earth to see Europeans - remains a place that's vastly difficult to visit, never mind conduct trade.

Yet the Highlands are where most of the farming happens. Rich tropical soils produce ample crops to feed the whole country - but getting produce to market takes many days. Logistics keep the nation trapped into low productivity.

Already a few enterprising companies have launched single-passenger drones, designed to bring someone into an urban area or airport very quickly. Still expensive and rare, these aircraft will find their true calling in another, less obvious use case - cargo.

A drone that can carry 150 Kg of passenger can carry a lot of produce - produce that can go from farmer to market in a matter of hours, with the right drone. Suddenly, the map of Papua New Guinea looks a lot more connected – through the air.

These cargo drones won’t be fancy, and they won’t be particularly safe. Because they’re not carrying passengers (except in emergencies, when they could be a real life-saver) they don’t need to be. They’re workhorses, designed to move cargo from the Highlands to the cities cheaply and efficiently.

Such craft change the economics completely. When it’s no longer expensive to ship produce to buyers - or manufactured goods to farmers – there's a far better chance for a real trading economy to take root.

The same thing will be true everywhere road systems (and all of the support networks needed for wheeled vehicles) haven’t reached. Australia’s outback, for example, with its stations spread over vast distances, may be better served by high-capacity drones than by truckers prepared to take on tricky roads remote settlements. Deliveries get cheaper, food gets cheaper and more accessible, and life gets a bit more comfortable for the folks living at the margins.

We’re accelerating into a ‘cargo culture’ where that same story will repeat itself again and again, becoming broadly true for everyone living at the extremes of distance or accessibility. Autonomous drones will transform the 21st century almost as comprehensively as automobiles did in the last.

For most of us, it will just mean we’ll get our kit a bit faster. But for many others, drones will be a lifeline connecting them to a world recently beyond their reach, just now coming into grasp.

It may even mean the human drive to urbanisation - seeing more than half of us living in cities - will lose some of its urgency. If you can get almost anything you need almost anywhere you are - and earn on the farm - why migrate? The more we look to the skies, the less the boundaries between city and bush seem to matter. ®