Future robocars will not need steering wheels or brake pedals 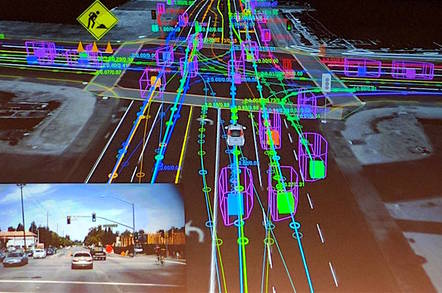 A draft US law that will let self-driving cars potentially swerve mandatory vehicle safety requirements has raced through the House of Reps.

Under the proposed legislation, American automakers will be able to ask the US Department of Transport for exemptions to safety standards, allowing them to get autonomous vehicles onto the streets for testing and deployment faster.

For example, cars must have brake pedals and steering wheels and other controls; under this draft law, a robo-ride manufacturer could ask to get a certificate allowing its vehicles to not have a steering wheel or brake pedals.

In order to do so, it would have to demonstrate its control software and computer hardware is safe and secure enough to sidestep tough regulations that otherwise apply to vehicles.

The proposed SELF-DRIVE Act – Safely Ensuring Lives Future Deployment and Research In Vehicle Evolution Act – was introduced by Bob Latta (R-OH) and Debbie Dingell (D-MI). On Wednesday, the House rushed it through after it survived the committee scrutiny stage. Now it's up to the Senate to read, debate and tweak, if it's to make its way onto President Trump's desk to be signed into law.

Congressman Fred Upton (R-MI) supported the bill, and said on the House floor: “This legislation and technology is indeed going to play a very important role in improving motor vehicle safety and addressing the rising number of traffic-related fatalities.”

At the moment, the criteria for testing autonomous vehicles on public roads in the US varies from state to state. The bill aims to simplify things for automakers by imposing an overarching framework on the federal level, allowing self-driving cars on all public roads.

The draft law, if fully passed, effectively gives the DoT's National Highway Traffic Safety Administration (NHTSA) the power to decide the design and safety limits of autonomous vehicles. Companies will need to demonstrate that they meet specific guidelines in order to be issued a “safety assessment certificate” allowing them to avoid certain rules and red tape. The NHTSA has up to 24 months to draft the rules for the issuing the certificates.

The goal is to get more self-driving cars on the road. At first, the NHTSA will be able to permit these special certificates for up to 25,000 vehicles sold or leased per manufacturer in the first year. That number will increase to 50,000 in the second year and 100,000 per automaker in the third year.

As autonomous vehicles rely on gathering data from their environments and users to make important decisions, privacy is another major area of concern. The bill states that manufacturers must develop a “cybersecurity plan” that shows how they will “[detect] and [respond] to cyber attacks, unauthorized intrusions, and false and spurious messages or vehicle control commands.”

Companies will also need to show how data will be collected, stored and used, and are forbidden from selling the data or using it for commercial purposes.

“Automated vehicles are going to be developed – it is simply where it will happen first and by whom. The US must stay at the forefront of innovation and technology, and we must make sure that we remain in the driver’s seat, as opposed to countries like China or India,” said Dingell. ®