JBOF ... or perhaps you'd prefer to look into a Barreleye 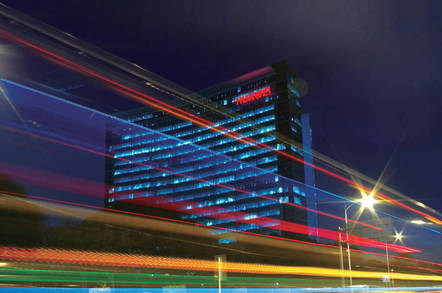 Analysis Will NVMe over Fabrics nuke the storage array into a JBOF winter or will array technology extend itself into new combinations of compute controllers, media and network links? Huawei has both technology strands in development with a high density 1U JBOF and a 4U x 16-blade Barreleye system.

The hardware demonstration systems seen on display at Huawei Connect 2017 in Shanghai were as sophisticated as anything coming out of HPE Labs its engineering developments, such as the Machine, and possibly more practical, with less blue sky thinking behind them.

A JBOF is just a bunch of flash drives and the aim is to get as much flash in as small a space as possible. The Huawei JBOF has three tilting rows of SSDs in a 1U shelf. Each row of 10 x 2.5-inch SSDs tilts up to provide access to the two subsidiary rows of drives inside it.

We understand these SSDs were made by Huawei itself, using bought-in 3D NAND chips and adding a Huawei-developed SSD controller ASIC.

Seagate showed a 64TB demo SSD at the Flash Memory Summit earlier this year, in an add-in-card format. Samsung is talking about a 128TB flash drive, using 4bits/cell (QLC) flash chips and with a SAS interface.

The JBOF is connected to the accessing server world by NVMeoF running across 100GbitE wires. The NVMeoF function was offloaded to hardware and that means the access latency is extended by just three microseconds over a direct-attached NVMe SSD.

A 32TB capacity 2.5-inch SSD inside a 30x SSD slot JBOF with an NVMe interface seems a good fit to on-premises all-flash box needs. We could think of a comparison with Micron's SolidScale JBOF with its 3.2TB 9100 SSDs and, probably, coming 11TB 9200 ones.

Huawei is developing an SSD with almost three times the capacity of Micron's 9200. Imagine a SolidScale-type box populated with Huawei 32TB SSDs in this JBOF, and running Excelero software in the accessing servers.

Huawei's JBOF needs something in accessing servers to use it and Excelero's software looks a good fit.

There is a deep sea fish called Barreleye which swims at a deep depth, where visible light from above the sea's surface stops, and it is a strong fish as well. Huawei has used its name for a future storage system, saying it is both deep and strong.

Barreleye is a different take on the storage array future. Think of a 4U enclosure with 16 vertically mounted blades inside it; that's a node's scale-up capability.

Using 3D NAND chips their capacity is currently 1TB. Eight of them would give a blade an 8TB raw flash capacity. Sixteen blades would provide 128TB of raw capacity in a single Barreleye enclosure.

It would feature on-demand expansion of compute and storage units.

Barreleye is Huawei's next generation storage hardware project. It is a DSSD-class product. There will be an update on OceanStore Dorado all-flash array systems, from the current V3 to v4 in, we think, 2018, and Barreleye, if all goes well, will follow that, possibly in 2019.

It leverages Huawei's SSD expertise with its own SSD drive-level ASIC and functionality like the FTL offloaded up the stack to the array controller CPU, an ARM CPU by the way, making the SSD respond faster.

The NVMeoF JBOF and Barreleye exemplify Huawei's hardware and system strengths. You could think of Huawei as a combination of Ericsson, Cisco and HPE. It is the equivalent of a Dell EMC, minus the PCs, but plus mobile phones (number 3 world-wide) plus a whole lot more telco and enterprise networking and a public cloud business unit, and minus most of the enterprise data management software.

What is going to stop Huawei growing more, a whole lot more? In the United States, the anti-Chinese, pro-domestic producer emotions and thinking could put a brake on sales. Outside the US, Huawei is already a formidable competitor and set to become even stronger. It is going to become a stronger element in the IT environment and thinking of Global 2000 companies and that is something US-based IT suppliers will need to come to terms with. ®