F-35 firmware patches to be rolled out 'like iPhone updates'

'I see you're trying to land. Please reboot the flight control system to continue' 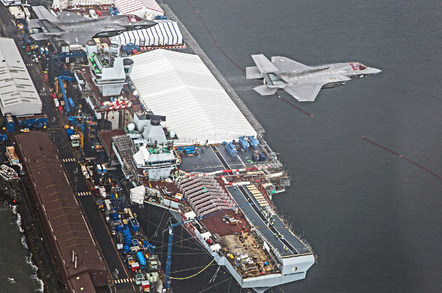 A pair of F-35Bs fly over aircraft carrier HMS Queen Elizabeth, seen while under construction in Rosyth

Initial software development for the F-35 fighter jet is coming to an end, while future tweaks to the aircraft’s onboard systems will be rolled out like smartphone app updates, according to reports.

“Envision a little window that pops up that says, ‘Your latest [electro-optical distributed aperture system] software update is ready for download: yes or no’?” Vice Admiral Mat Winter, of the US Navy, told aerospace industry magazine Aviation Week.

While this image might be more than a little alarming for a number of reasons, it appears to be the future of the F-35’s core firmware. The current version, Block 3i, is due to be superseded by Block 3F once development on the latest version is completed – the projected date for which is a bone of contention between the US Air Force and various American government auditors.

American aerospace magazine Aviation Week has been reporting in depth on American deployment plans for the F-35. As the magazine notes, a much-trumpeted release of Block 3F earlier this month is actually an interim version, pending final patches which will bring it up to full release spec. Indeed, the testing completion date has now slipped to June 2018.

“Even with the final version of 3F, the Air Force will not be able to use the newest aircraft in combat,” reports Aviation Week. This applies equally to the F-35Bs bought by the UK as it does to USAF F-35As. The plan is for a future version, Block 4, to be the first combat-capable version.

Plans to deploy new patches in the same manner as users download iPhone updates could, potentially, lead to a state where different aircraft are in different revision states, causing confusion later on. By the very nature of the ongoing trials, there will inevitably be a large number of changes needed before the final version of Block 3F, and then Block 4, can be released.

One hopes that Admiral Winter’s oversimplification of the update process really was an oversimplification, though. The last thing a fast jet pilot sitting on an aircraft carrier’s deck needs is for the screens to go all BSOD mid-way through a borked update. ®