That gives me a great idea, says Putin – payback 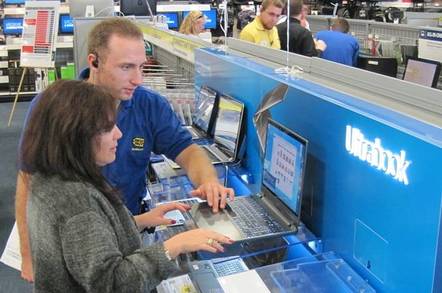 'Let's just take that nasty software off and put some good, clean American code on'

Updated US big box retailer Best Buy has pulled from its shelves Kaspersky Lab's PC security software amid fears of Kremlin spies using the antivirus tool to snoop on Americans.

Despite there being no concrete evidence to indicate that the security software is a threat, the retail chain is ending its long relationship with Kaspersky, a Best Buy spokesperson confirmed to The Register on Friday. As to the reasoning, the store chain just said that it doesn't comment on contracts with specific vendors.

"Kaspersky Lab and Best Buy have suspended their relationship at this time; however, the relationship may be re-evaluated in the future," the Russian biz told The Register today.

"Kaspersky Lab has enjoyed a decade-long partnership with Best Buy and its customer base, and Kaspersky Lab will continue to offer its industry-leading cybersecurity solutions to consumers through its website and other retailers."

The news caps off a lousy week for Kaspersky. On Monday US Senator Jeanne Shaheen (D-NH) introduced an amendment to the National Defense Authorization Act that would ban Kaspersky software from any federal computer, following on from her earlier ban on the software being used by the Department of Defense.

"Because Kaspersky's servers are in Russia, sensitive United States data is constantly cycled through a hostile country," she said in an op-ed supporting the amendment.

"Under Russian laws and according to Kaspersky Lab's certification by the FSB, the company is required to assist the spy agency in its operations, and the FSB can assign agency officers to work at the company. Russian law requires telecommunications service providers such as Kaspersky Lab to install communications interception equipment that allows the FSB to monitor all of a company's data transmissions."

What she didn't add is that under the terms of the Patriot Act and other legislation pushed through as part of The War Against Terror (TWAT), American software companies are under similar obligations if the government comes knocking at their doors.

But why let the facts get in the way of a good bit of publicity? Bashing Kaspersky is very much the game de jour at the moment. The FBI has been giving classified briefings to politicians warning them about the software and conducting nocturnal visits to Kaspersky staffers' homes. Those of us without security clearance are being told to trust them and steer clear of the nasty Russian code, m'kay.

Eugene Kasperky, the eccentric founder of the firm that bears his name, has repeatedly and vehemently denied that there are any backdoors in his software that the FSB can use. He has offered the source code up for inspection by the US government, but no one's taking him up on it.

All this technology bashing has had another effect, however. It appears to have given Vladimir Putin ideas about doing exactly the same thing – a move that could be very costly for some technology companies.

At a meeting of technology executives in the Perm region, Putin told them that they should aim to be using only Russian software. Currently about 30 per cent of the software used by Russian business is home grown, and Putin told them that had to change – the government might penalize some companies if they don't.

"In terms of security, there are things of critical importance for the state, that are essential to support certain industries and regions," he said, the state mouthpiece RT reports.

"You shouldn't offer IBM [products], or foreign software. We won't be able to take it because of too many risks." ®

Best Buy has confirmed that customers who bought Kaspersky software can have it removed by the retailer's Geek Squad techies, who may also check the computer for child abuse images.