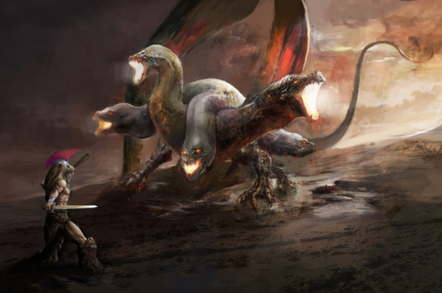 Analysis More details have emerged about Huawei's public cloud. It is like a hydra, a creature with many heads.

The company will build a global cloud network based on its own public clouds and those it has built with partners. Outside China Huawei is partnering with companies such as Deutsche Telecom, Orange and Telefónica. They will sell the cloud services to local enterprises using infrastructure Huawei is building in their regions.

That infrastructure, meaning cloud data centres, will be owned, branded and operated by Huawei's public cloud alliance partners, but built by Huawei.

Guo Ping, Huawei's rotating CEO, said: "The cloud is a cornerstone of the intelligent world. Society is experiencing a tangible Matthew effect in digital technology development. Because of this, as well as economies of scale in investment, clouds around the world will begin to converge – becoming more and more centralised. In the future, we predict there will be five major clouds in the world. Huawei will work with our partners to build one of those five clouds, and we've got the technology and know-how to do it."

We understand the five to be Alibaba in China, Amazon, Google and Microsoft, including Huawei. Below this tier will be smaller, specialised public clouds, which may include IBM and Oracle's.

Huawei believes in the hybrid cloud idea – linked and communicating private clouds, meaning on-premises IT, and public clouds with data and service transfer between them. The on-premises IT infrastructure would be cloud-style in its provisioning and operation.

The public cloud could be used as nearline and cold storage tiers with hot data stored and processed on-premises. Backup, archival and test-and-dev data would be sent to the public cloud for less expensive storage.

Huawei believes in the business possibilities so much that it has recently elevated its cloud unit above other departments in its corporate hierarchy.

It says that, since the cloud unit's formation in March 2017, it has seen a 238 per cent increase in its user base, and has released 40 new cloud services, including a data warehouse, advanced DDoS protection and a content delivery network. To date Huawei has released 85 cloud services.

A dozen automobile companies (including Volkswagen and Mercedes-Benz), Philips, the Commercial and Industrial Bank of China (ICBC), and several government service platforms are using the Huawei cloud and services from its partners.

The European Organization for Nuclear Research (CERN) has been running its workloads on the jointly developed Huawei and Deutsche Telekom public cloud. With thousands of Huawei's high-performance computing nodes, CERN has lowered the overall maintenance costs of Large Hadron Collider (LHC) experiments by approximately 67 per cent and shortened its online cycle from 90 to 15 days.

Among the applications Huawei is developing for its public cloud are Enterprise Intelligence (EI) cloud services, meaning AI in plain English.

Huawei makes the point that AI applications are basically single-use but they need to be made more generic. Zheng Yelai, president Huawei's IT product line said: "AI needs to create more value for enterprises. To make this happen, we have to integrate single-point techniques and apply them, together, in sophisticated enterprise scenarios. We're positioning Huawei Cloud as an enabler of the intelligent world. It provides AI, IoT, computing, and storage capabilities that provide enterprises with more innovative, intelligent cloud services."

Huawei is using EI services itself, from supply forecasting to logistics, warehousing to customs clearance, transit, and signing goods receipts. In packing EI enables a 3D view of each container, improving the efficiency of overall container usage by 6 per cent, which doesn't sound much, but, spread across hundreds of thousands of containers, will make a bean-counter smile.

In warehousing EI helps design a better way to place and categorise goods and optimise paths for selecting goods and their storage spaces. This has led to a 10 per cent improvement in its warehousing efficiency, which broadens the bean-counters' smile.

Unlike Amazon and Google, Huawei is developing application platform services on its cloud, not just variations on the basic compute, storage and database component offerings that their customers have to combine into a data centre-level application service. While Amazon and Google offer the public cloud equivalent of bare metal, so to speak, Huawei and its partners are offering enterprise data centre-type platform services.

Suppose you wanted to hire a car from AWS. You'd rent the basic components – engine, gearbox, cabin, fuel supply, wheels – and combine them yourself into a vehicle. You get a lot of flexibility but also heaps of integration pain and pricing problems.

Huawei and its partners are offering the cloud equivalent of customised hire cars for their customers. They have moved up stack and are playing a different game to Amazon and Google. Microsoft, with Office 365, is higher up the stack than Amazon and Google but not up to the same level as Huawei and pals.

Will Huawei's scheme work? If we see enterprises moving away from the Amazon, Google and Microsoft clouds and adopting ones from the Huawei+partner ecosystem then we'll know Huawei's cloud alliance has traction. Let's see what has happened in a couple of years' time. ®