Who needs actual evidence when you're scared of Russia? 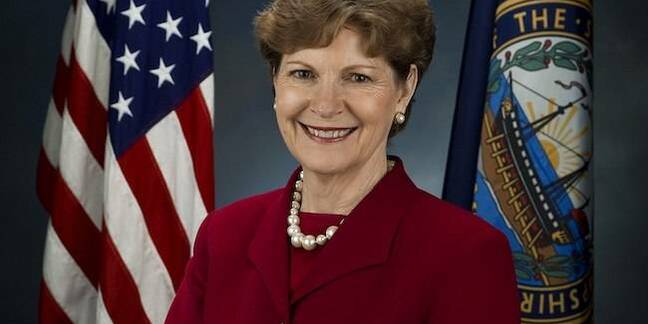 Down with this sort of thing ... Jeanne Shaheen

Her plan is to amend the nation's latest National Defense Authorization Act, which is legislation that has to be passed each year to green-light funding and policies for the US military. It's also a handy vehicle for sneaking pet agendas into law, each piggybacking the proposed act: there are 341 amendments on the House version of the bill already, and eight on the Senate version.

In June, Shaheen successfully lobbied the Senate Armed Services Committee to back her call to ban Kaspersky's code from Uncle Sam's systems. The panel duly concluded its scrutiny of the funding bill with the following recommendation, among others:

A provision that would prohibit any component of the Department of Defense from using, whether directly or through work with or on behalf of another element of the United States Government, from using any software platform developed, in whole or in part, by Kaspersky Lab or any entity of which Kaspersky Lab has a majority ownership.

And thus the Senate version of the defense funding act was updated to include the following text to rid US federal government computers of Kaspersky's security tools by October 2018:

SEC. 1630B. PROHIBITION ON USE OF SOFTWARE PLATFORMS DEVELOPED BY KASPERSKY LAB.

(a) Prohibition.—No department, agency, organization, or other element of the Department of Defense may use, whether directly or through work with or on behalf of another organization or element of the Department or another department or agency of the United States Government, any software platform developed, in whole or in part, by Kaspersky Lab or any entity of which Kaspersky Lab has a majority ownership.

(b) Severance Of Network Connections.—The Secretary of Defense shall ensure that any network connection between a department, agency, organization, or other element of the Department of Defense and a department or agency of the United States Government that is using or hosting on its networks a software platform described in subsection (a) is immediately severed.

This text has yet to be voted on by the Senate as a whole, which is due to debate the wording in the next few weeks. The provisions also have to pass the House before a finalized law can be presented to President Donald Trump to sign off. The House version of the military funding act has yet to include sanctions specifically against Kaspersky, we note.

In the meantime, Shaheen is on the offensive, drumming up support for her ban via her website and a New York Times op-ed on Tuesday.

"To close this alarming national security vulnerability, I am advancing bipartisan legislation to prohibit the federal government from using Kaspersky Lab software," she explained.

"The Senate Armed Services Committee in June adopted my measure to prohibit the Department of Defense from using Kaspersky Lab software, to limit fallout from what I fear is already a huge breach of national security data."

Shaheen claims Kaspersky software potentially gives Russian President Putin an "all-access pass" to the computers it is on and beams sensitive information back to Kremlin servers. Under Russian law, the software biz has a responsibility to aid its home country's internal security agencies, she posited, and as such the code has no place on US computers.

The banishment was previously floated as a way of "countering Russian aggression," and follows years of Kaspersky-bashing inside Congress and outside. Amid the Senate advisory committee's deliberations, Eugene Kaspersky offered up the source code of his software for review – an offer no one in the US government has taken up.

Earlier, in May, five US spy bosses and the acting FBI chief were unanimous in saying they would not use Kaspersky software – although, like Senator Shaheen, they offered no evidence as to why. The following month the FBI raided the homes of some Kaspersky employees, but no arrests were made.

And in July the General Services Administration removed the biz from its list of government-approved purchases, severely limiting its further use. Senator Shaheen wants it banned outright.

"Kaspersky Lab doesn't have inappropriate ties with any government, which is why no credible evidence has been presented publicly by anyone or any organization to back up the false allegations made against the company," the outfit told The Register.

"The only conclusion seems to be that Kaspersky Lab, a private company, is caught in the middle of a geopolitical fight, and it's being treated unfairly even though the company has never helped, nor will help, any government in the world with its cyberespionage or offensive cyber efforts." ®