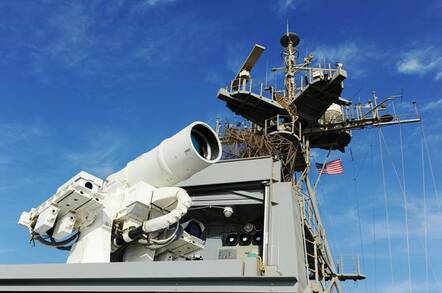 According to the Mail on Sunday, the Argentinians are interested in buying the 46-year-old former landing platform (dock) from the American Navy when she is decommissioned next year.

“Senior Pentagon sources have confirmed talks are ongoing with the Argentinians over a Landing Platform Dock vessel capable of launching 800 troops, six helicopters and 2,000 tons of equipment into a war zone,” reported the paper, contrasting this with the Royal Navy’s HMS Ocean, which is very similar to the Ponce’s original configuration.

As regular readers know, the mighty Ponce has spent the last few years blasting various targets into bits using a shiny new $40m laser cannon and the US Navy even deployed her to the Gulf a few years ago.

The awe-inspiring Ponce was refitted in 2011, converting her from her original LPD configuration into an afloat forward staging base, chiefly for deploying Sea Fox minesweeping drones. Since then she has gained the infamous laser cannon (known in US military parlance as LaWS, standing for Laser Weapon System) and seemingly spent most of her time zapping small boats, airborne drones, and other such items, finding out what the capabilities of the $1-a-shot laser weapon really are.

Argentina’s desire to get its hands on the Ponce will chiefly be driven by the ship’s amphibious assault capabilities. The original LPD fit stern ramp is still in position, allowing the ship to host landing craft. These can be used to put soldiers in military vehicles ashore for a raid – such as the one at Yorke Bay, near Port Stanley, capital of the Falklands. An Argentine ship dropped off a score of tank landing craft whose crews went on to capture the islands’ capital.

However, this ambition for a powerful warship may overstate Argentina’s military strength. A patrol ship named “Islas Malvinas” (the unofficial, Argentine, name of the Falklands) recently ran aground, while pictures have been circulating on the Internet for years of Argentine destroyer ARA Santisma Trinidad, which spent three years lying on her side in a naval base, having capsized due to poor maintenance.

The Ponce would be far from the first former US warship acquired by Argentina. In 1951 the Second World War cruiser USS Phoenix, a veteran of the Pearl Harbour attack by Japan, was bought by Argentina. She was renamed ARA General Belgrano – and sunk by British nuclear submarine HMS Conqueror during the 1982 Falklands War. Doubtless the same fate would befall the Ponce if Argentina tried the same trick again. ®