Asks for 12 pence for 'unfair competition' 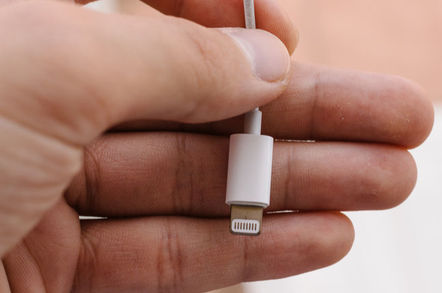 One of the top third-party smartphone accessory manufacturers in China* is suing Apple for all of one Chinese yuan (about 12 pence; 15 US cents; 13 euro cents).

Shenzen-headquartered Pisen filed a competition suit against Cupertino in the Beijing Intellectual Property Court (which has jurisdiction over such cases) this week, the firm told The Register today.

The dispute boils down to Apple's certification programme for third-party iOS cables used for data-transfer and charging in Cupertino's mobile devices, called MFi. MFi has apparently not granted its seal of approval to some of Pisen's products. According to Apple, "uncertified" Lightning connector accessories may not function, break easily or even damage your iOS device.

"The compulsory MFi certification of Apple products not only interferes with the free choice of customers," the firm told The Register, "but also limits Pisen['s ability] to compete fairly with other companies in the market of Apple spare parts."

According to a post on its Weibo social media channel, it is pursuing a mere single Chinese yuan in damages. China's Ministry of Commerce has not responded to a request for confirmation of receipt of the case, although the firm claims the Beijing IP Court has put it on record.

Mo Jia, a smartphone market research analyst at Canalys in Shanghai, told The Reg that Pisen is one of many mobile device accessory manufacturers with a track record of "quality products" including batteries and cables, but without certification – which includes the provision by Apple of a chip inside the cable plug itself – its Lightning cables could be unstable during data transfer or charging.

He said some third-party accessory manufacturers in China do have MFi certification, but with occasional exception their products are typically more expensive. Android phones, meanwhile, do not have a certification process. When the European Union recommended smartphone makers use the USB charging standard in 2009, Android manufacturers voluntarily agreed to do so en masse.

Jia says given the low restitution requested, similarly to other businesses in China that sue large companies for small amounts, Pisen may be motivated to pursue what it deems to be justice as well as perhaps the associated attention.

Similar cases that Cupertino has lost in the past include its suit against Xintong Tiandi Technology for the use of an "IPHONE" brand. But although it initially lost a separate case where Shenzen Baili alleged that Apple "copied" the exterior design of its smartphone (leading to an iPhone 6 and 6 Plus ban), that decision was overturned after appeal.

David Shen, an intellectual property lawyer at Allen & Overy in Hong Kong who has not directly handled competition cases but has dealt with monopoly issues as part of IP lawsuits, told The Register that the Beijing IP Court has to first determine if Apple has a dominant market position. If it determines that it does have one, then the court must determine if it abused that position.

The court – one of the busiest in China – uses a hybrid system that includes a consideration of case law, he says.

Apple has not responded to a request for comment. ®