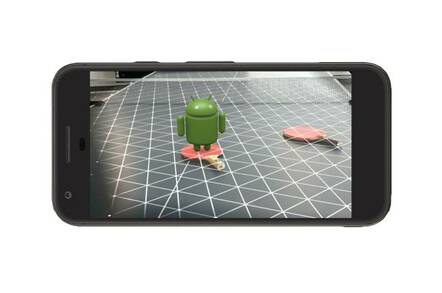 Google on Tuesday released a preview of its augmented reality toolkit, although the company acknowledged that only a small portion of Android's installed base will be able to use the software.

ARCore is Google's answer to ARKit, Apple's software development kit for creating augmented reality (AR) applications. It's also the heir to Google's Tango SDK, which was designed for creating AR applications on specialized hardware with sensors for measuring depth.

AR differs from virtual reality, or VR, in that it doesn't demand expensive headgear that shuts out the real world, isn't known for inducing nausea, and hasn't been stigmatized by consumer indifference. AR places computer graphics in photorealistic scenes; VR reimagines the visual world completely.

In theory, ARCore will allow Android developers to join the rush to create apps that mix real and imaginary things, an app store category not presently oversaturated.

In practice, it will be scarce as hen's teeth.

"ARCore will run on millions of devices, starting today with the Pixel and Samsung's S8, running 7.0 Nougat and above," said Dave Burke, Google VP of Android engineering, in a blog post. "We're targeting 100 million devices at the end of the preview. We're working with manufacturers like Samsung, Huawei, LG, ASUS and others to make this possible with a consistent bar for quality and high performance."

Mind you, Burke says there are more than two billion active Android devices, so Google is hoping to reach 5 per cent of its installed base, eventually.

Apple introduced ARKit in June at its Worldwide Developers Conference, eliciting enthusiasm from its developers, despite downsides like power consumption. There are third-party AR-oriented SDKs like ARToolKit, ARmedia, Vuforia, and Wikitude. Microsoft has its HoloLens SDK, Facebook has its Camera Effects Platform, and until Tuesday, Google's entry consisted of its Tango SDK. ARCore is based on Tango, without the special hardware requirements.

"They say it will grow to 100 million in the near future, but it's still going to be dwarfed by ARKit support, which is several hundred million," he said.

Inbar has been involved with AR for the past decade and founded an AR game company called Ogmento that became Flyby Media and was acquired by Apple last year. So his affinity for the technology is perhaps unsurprising.

Inbar said while glasses represent the optimal means of AR delivery, mobile AR represents a stepping stone toward that vision. Various startups have been creating AR-oriented experiences for years, he said, but it was always an uphill battle to gain attention.

With the success of Pokemon Go, Snapchat's World Lenses (AR filters for images), and SDKs from Microsoft, Facebook, Apple, and now Google, he expects interest in AR will grow among consumers and developers.

"With Apple and Google jumping, it creates awareness and people start to look for it," he said.

Google, said Inbar, has tried to outdo Apple by offering a broader range of capabilities in ARCore than can be found in ARKit. Apple's ARKit, he explained, supports placing objects on a single virtual plane, whereas Google's ARCore supports multiple planes, such as walls, and can understand lighting.

"Apple allows you to have a shadow for your object, but Google adds the ability to understand the lighting conditions," he said. "You can adjust your lighting on the actual object so it looks more realistic."

Prior to the introduction of ARCore, Matt Miesnieks, a managing partner at Inbar's firm, argued at length that ARKit was better than the alternatives.

Inbar believes Apple has the advantage, due to its control over hardware and the tendency for the App Store to generate more revenue than Google Play. But both ARCore and ARKit are very similar, he said.

"It's going to be interesting to see who takes the lead." ®