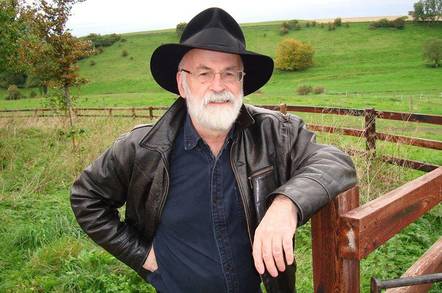 A hard drive containing the unfinished books of Terry Pratchett has been destroyed by a steamroller, in fulfilment of the late author's last wishes.

The works were crushed by a vintage John Fowler & Co steamroller at the Great Dorset Steam Fair, ahead of the opening of a new exhibition about the author’s life and work. It is thought up to 10 incomplete novels were flattened.

Friend Neil Gaiman, with whom Pratchett cowrote Good Omens, had revealed in 2015 that Pratchett had instructed that he wanted "whatever he was working on at the time of his death to be taken out along with his computers, to be put in the middle of a road and for a steamroller to steamroll over them all".

Pratchett's former assistant Rob Wilkins tweeted that he was "about to fulfil [his] obligation to Terry".

The hard drive will go on display as part of a major exhibition about the author's life and work, Terry Pratchett: HisWorld, which opens at the Salisbury Museum in September.

There goes the browsing history... Many thanks to @steamfair. Soon to be on display at @SalisburyMuseum in September https://t.co/Di8tvTO4Hi pic.twitter.com/onGGWLDYL4

Pratchett died in March 2015 after a long battle with Alzheimer's disease aged 66.

He wrote more than 70 books for adults and children, many of which are set in the Discworld, a flat planet full of magic, loose laws of physics, and Octarine, the eighth colour of the world's light spectrum, visible only to wizards and cats. ®