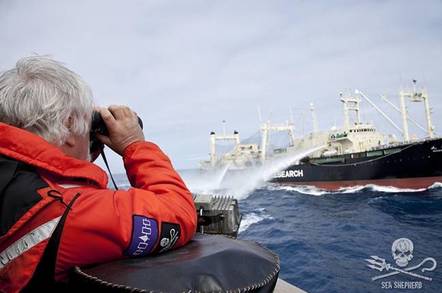 The anti-whaling organization Sea Shepherd Global has said it won't be going after the Japanese fleet of cetacean "research vessels" in their annual pilgrimage to the Southern Pacific – because satellite technology has made the job impossible.

For the past 12 years, the group, set up by former Greenpeace activist Paul Watson, has been following the Japanese fleet and trying to stop them as they researched how many whales they could kill out of their quota. But after limited success in last year's Operation Nemesis, Watson has called it a day and blames the Japanese military.

"What we discovered is that Japan is now employing military surveillance to watch Sea Shepherd ship movements in real time by satellite, and if they know where our ships are at any given moment, they can easily avoid us," he explained.

"During Operation Nemesis, the Sea Shepherd ships did get close and our helicopter even managed to get evidence of their illegal whaling operations, but we could not physically close the gap. We cannot compete with their military grade technology."

Doubtless the group might have had more luck if it still had the high-tech speedboat MY Ady Gil, but that was rammed by a Japanese whaling vessel and scuttled after the bow was ripped off by the impact. Since then the group has been left with slower-moving ships that can't keep up with the fleet.

Nevertheless Watson claimed the group had achieved much over the past few years. The annual Japanese whale hunt was virtually unheard of when Sea Shepherd started its campaign. It became world news and spawned the TV show Whale Wars, dramatically raising the profile of the hunt.

The campaign was controversial. Watson's group used a variety of tactics, including ramming whaling ships, flinging smoke bombs and foul-smelling chemicals onto the decks, and trying to foul propellers with ropes and cables.

However, the attention did bring results. In 2014 the International Court of Justice ruled that the Japanese whaling wasn't being carried out for scientific research as claimed, but was illegal whaling. Japan ignored the ruling, but did cut the size of its whaling quota by two thirds.

But the Japanese also got smarter about dealing with the Sea Shepherd protesters. Its fleet appears to have been getting regular updates from Japanese satellites on the position of the Sea Shepherd fleet, and used that to avoid confrontation. With the charity's costs rising, Watson has now decided to focus on other areas.

"Sea Shepherd's continuing efforts to go after and shut down whalers will continue, and not only against Japanese whaling, but also against Norwegian, Danish, and Icelandic whaling," Watson said.

"This is what we have been doing for forty years. We will never quit until the abomination of whaling is abolished forever by anyone, anywhere, for any reason." ®