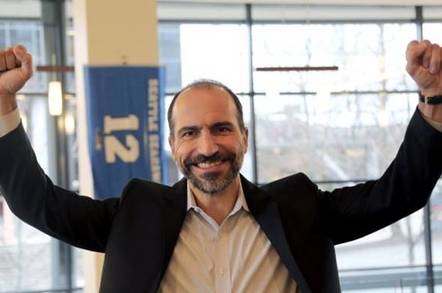 Following a selection process as chaotic and flawed as its own corporate culture, Uber has finally selected a new CEO: current Expedia boss Dara Khosrowshahi.

Khosrowshahi (kosh-row-sha-he) is significantly lower-profile than others who were apparently on the sort list for the top job, including Meg Whitman of HP and GE former head honcho Jeff Immelt.

But according to seemingly endless rumors around the decision, the other candidates were turned down for insisting on a their-way-or-the-highway approach, or for lacking a good cultural fit (in a good way). Immelt ruled himself out of the top job on Sunday.

I have decided not to pursue a leadership position at Uber. I have immense respect for the company & founders - Travis, Garrett and Ryan.

The 48-year-old Khosrowshahi is, according to people who know him, like a calmer, less-douchebaggy version of former CEO Travis Kalanick. He was born in Iran and his family fled to the US following the revolution in 1978, when he was just eight.

He was raised just outside New York with his mother and two brothers – his father was detained in Iran for six years after he traveled back to look for his own father.

Khosrowshahi got a degree in electrical engineering from top-flight Brown University, and became an analyst at Allen and Company (where his brother is now managing director) before joining USA Networks and becoming boss of Expedia in 2005.

He's also notable for getting paid more than any other S&P 500 CEO back in 2015, thanks to a huge stock option worth $95m that was aimed at keeping him with the company until 2020. Annual pay subsequently fell back to $2.5m.

Khosrowshahi has been strongly critical of President Trump – not hugely surprising given his background, Trump's antics, the fact that he lives just outside Seattle, and that he was not sufficiently high-profile, until now, for his criticism to be a story in and of itself.

He told employees that the Trump Muslim ban was unconstitutional and warned that it made the country "a smaller nation, one that is inward-looking versus forward thinking; reactionary versus visionary." He's also made numerous other critical comments about the Twit-in-chief.

Khosrowshahi has also fought a long battle against Google, which has been trying to pull business away from Expedia with various search enhancements and flight and accommodations services. Uber is in a similar struggle with the ad giant.

And even though he is not widely known in Silicon Valley, Khosrowshahi does have extensive family connections in the Valley and in tech.

As to why he would want to take over at Uber, that's anyone's guess.

Although the position is well compensated and high profile, it is also a dumpster fire following years of questionable business practices and a corporate culture that has become a byline for Silicon Valley tech bro excesses.

In addition to having a reputation for being a bullying, sexist place to work, Uber faces countless lawsuits for trying to jam its way into unwelcome markets, screw both its customers and its drivers, and develope numerous systems that targeted rivals and critics.

And then there is the dysfunctional board. Former CEO Kalanick tried to stack his board with loyalists in order to retain effective control. That failed and he was ultimately fired, but according to Kalanick himself, he is trying to force his way back in. Those efforts have in turn sparked a lawsuit from a key investor trying to get Kalanick booted off the board and the extra board seats he created removed.

In short, there are challenges and there is Uber. Khosrowshahi clearly feels he has what it takes to turn things around. We shall have to wait and see. ®