If you can get it running and figure out the keyboard, it's impressive 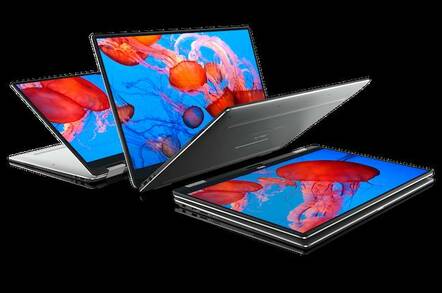 Hands-on When my kids were very little, they'd do something a tiny bit naughty and I'd wiggle my index finger as if to threaten a tickle for their mock misbehaviour. They'd then make a great show of running away shrieking. And now I've discovered that finger has another power, namely making a premium laptop look bad.

Said laptop is Dell's XPS13, the company's corporate flagship. The unit I was offered to play with packs a Core i7-7Y75 at 1.3GHZ , 16GB of RAM, a 3200x1800 touch screen and cunning hinges that let it flip over to become a tablet. A pair of USB-C ports, a micro-SD card slot and a headphone jack are the only physical connections offered, plus Bluetooth and WiFi.

Battery life wasn't great. The machine made it about five hours into a day of toting it around a trade show, opening and closing it every 40 minutes or so while typing hard and using WiFi intermittently. Perhaps I should have dimmed the screen first. Even when I did so, video sucked about 20 per cent of capacity for every 30 minutes of downloaded Netflix playing on the full screen.

The machine is well balanced and easy to type on and I could easily work with it on my lap or on a desk. I was also able to type in an economy class airline seat, an environment in which I usually struggle to get much done. Whether that was down to good design or a tolerant and modestly sized adjacent passenger is hard to say!

The more I used the XPS13, the more a single finger became a problem. My troubles started when trying to open the machine's clamshell, which offers a shallow slot about 1cm long as the only point of leverage. That slim slot wouldn't respond to a single fingernail so I needed to balance the laptop on its spine to prise it apart with two hands. Which is just silly.

A single finger also became a problem because the half-height Up arrow is flanked by Page Up and Page Down keys. I reckon that even hunt-and-peck typists want to use the arrow keys without looking, so this keyboard configuration greatly increases the likelihood of fat-fingered accidents. Even after a few days with the machine, by which time overall typing accuracy had improved, I was still getting a stray PgUp or PgDn every sentence or three. It's an odd design choice and could be a deal-breaker for those who type a lot.

The third single-finger problem comes from the machine's On button, which is so small and has such imperceptible motion that I was never quite sure if I had pressed it. That there's a five-or-more second lag between pressing the button and the XPS13 showing any signs of life doesn't help, because until I figured that out I tried to press it again, which just turned it off. Nor is there any indicator on the device to tell you that it is on except waiting for the screen to get going. A single LED would make this single-finger problem go away and seems like a fine remedy to some utterly avoidable confusion.

The machine also gives users an oddity to consider, in the form of a small plate on its base that bears a shiny XPS logo and a small finger-slot that lets you lift up the plate to reveal a thicket of compliance logos and a single screw. The plate pivots on a band of a dark polymer that doesn't seem built to survive years of fidgeting. Fit and finish are otherwise fine.

I'd be inclined to leave your fingers down for this one. It's not worth a raised middle digit, while the effort to click a "Buy" button will be better-expended on machines with less-obvious flaws. ®

The monster workhorse with price tag to match