Forget trigonometry, 'cos Babylonians did it better 3,700 years ago – by counting in base 60!

Tablet beat Pythagoras by a millennium, may explain how the ancients built pyramids 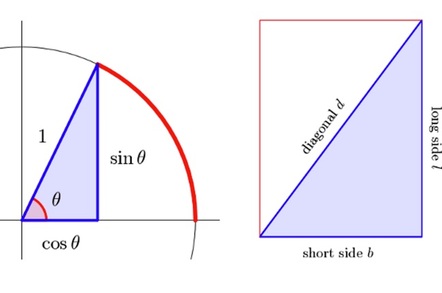 Those of you who can remember trigonometry can feel free to forget it, because ancient Babylonian mathematicians had a better way of doing it – using base 60!

That's the conclusion of a new paper, Plimpton 322 is Babylonian exact sexagesimal trigonometry, in the new issue of the journal Historia Mathematica.

The “Plimpton 322” from the title is a clay tablet inscribed with cuneiform script. Discovered in the early 1900s, the tablet has been of interest to mathematicians for years because it describes Pythagoras' theorem, yet is thought to have been created around 1800BC, more than a thousand years before Pythagoras was born and started tinkering with triangles.

The rest of the tablet's four columns and fifteen rows of numbers have been debated for some time, but in the paper Daniel Mansfield and N.J. Wildberger, both of the University of New South Wales' School of Mathematics and Statistics, suggest it was a trigonometric table.

Mansfield explains his work in the video below:

Mansfield and Wildberger have also penned a piece at The Conversation in which they explain that the Greek version of trigonometry defines triangles by their angles, but Babylonians cared only for the ratios of the lengths of each of their sides (depicted above, or here for m.reg readers).* They also opine that the Babylonian way of doing things may have saved generations of students plenty of sweat and frustration, as calculating triangles with ratios is consistent and simple compared to wrangling cos and sin functions.

The pair also feel their work explains how the ancients could build things like step pyramids in Babylon, and perhaps even Egypt's pyramids as our knowledge of that ancient nation's maths has also shown us they had a fondness for ratios. ®

* You can see Plimpton 322 itself here, where you will also learn that commercial reproduction of images depicting the tablet is forbidden without permission. As we're writing this at a time that permission is likely to take hours to secure, we're linking.