Vital fair use copyright defense lands – thanks to warring YouTubers

Using someone else's material in your reaction vid is A-OK, says NYC judge 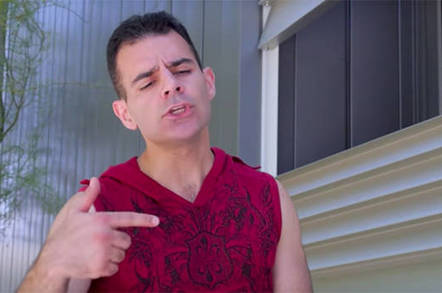 Analysis The fair use of copyrighted video content has been upheld in an important legal battle in America between two YouTubers.

Ethan and Hila Klein were sued last year by Matt Hosseinzadeh over a video in which they mocked his "Bold Guy" persona and his "Cringe-tube" videos where he wins over attractive one-dimensional women by acting like a douchebag.

In their video, the Kleins made extensive use of one episode in which Matt Hoss chases "Parkour Girl" around a corporate headquarters jumping over low-level walls and stairwells. In between clips, the Kleins alternatively mock and profess ironic admiration for the video.

Hosseinzadeh was not amused however, and sent a DMCA takedown notice to YouTube, which the company complied with the same day. In response, the Kleins appealed the notice claiming that their video was covered by fair use.

Hosseinzadeh responded to that three days later by launching a lawsuit accusing them of copyright infringement. In an ongoing back-and-forth, the Kleins then posted a video in which they noted they were being sued, and criticized Hosseinzadeh for being too thin-skinned. And he responded by amending his lawsuit to include a claim for defamation.

The case caught the attention of the broader YouTube community, however, because the use of others' video content is an extremely common form of YouTube episodes. The so-called "reaction videos" are cheap and easy to produce and are popular thanks to their snarky, inventively critical approach.

Faced with legal bills in the hundreds of thousands of dollars, another YouTube personality, Philip DeFranco, created a crowdfunding campaign that ended up raising over $170,000 for the Kleins' legal defense.

Even though both videos are objectively poor both in style and content (even the judge notes "irrespective of whether one finds it necessary, accurate, or well-executed, the Klein video is nonetheless criticism and commentary"), The Bold Guy vs Parkour Girl video has somehow racked up over 11 million views, and at least partially bankrolled the ensuing legal battle. In a recent video, Hosseinzadeh framed the legal battle as "fighting for artists' rights."

Yesterday, New York district Judge Katherine Forrest threw out [PDF] both claims of copyright infringement and defamation this week however, noting that the Kleins' use of Matt Hoss' content was covered by fair use since they had incorporated "relatively short segments of the Hoss video with long segments of the Kleins' commentary." Critically, the judge also explicitly referenced "reaction videos" as belonging to their own genre.

"The Klein video is arguably part of a large genre of YouTube videos commonly known as 'reaction videos'," her judgment noted. "Videos within this genre vary widely in terms of purpose, structure, and the extent to which they rely on potentially copyrighted material."

She continued: "Some reaction videos, like the Klein video, intersperse short segments of another's work with criticism and commentary, while others are more akin to a group viewing session without commentary."

Although the judge stressed that her ruling did not imply that all reaction videos constitute fair use, it nevertheless gives a strong defense to YouTubers that is likely to limit future copyright infringement lawsuits.

"As critical as it is, the Klein video is roughly equivalent to the kind of commentary and criticism of a creative work that might occur in a film studies class," she concluded.

Next page: The law
Page:
Tips and corrections
8 Comments