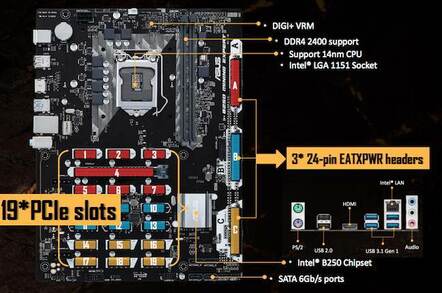 The B250 Mining Expert

The Register doesn't really cover motherboards, but when one comes along with 19 PCIe slots – yup, nineteen, ten plus nine, so it can run 19 GPUs – it's hard not to want to share the news.

ASUS this week teased the new “B250 Mining Expert” which boasts all those slots because – as the name implies – its role in life is mining cryptocurrency.

The board can't do it all itself, of course. ASUS' preferred GPU is the P106, a variant of NVIDIA's GeForce GTX 1060, 1,280-CUDA-core, 1,506MHz affair that can surge to 1,708 MHz when required and boasts 6GB of RAM. ASUS' version is shorn of anything to do with displaying video so that it can smoke hashes to cook cryptocurrency.

Do the math: 19 GPUS, 1,280 cores apiece … this motherboard could end up hosting 24,320 cores before you fill the Intel LGA 1511 socket with a Skylake, Kaby Lake or Coffee Lake CPU. That chip's half-dozen or so cores are hardly worth counting.

The board is also equipped to slurp three power supplies, because all those GPUs are thirsty. There's also a capacitor dedicated to each PCIe slot to make sure the juice doesn't fluctuate and upset the precious mining machines. A mining-specific BIOS that lets you manage all those GPUs rounds things out.

The result? 407 megahashes per second, if the planets align, in the above configuration. If you put in better graphics cards, your hash rate will go up. Obviously, ASIC mining rigs – with chips specially designed for hashing – will trump this off-the-shelf gear. Ultimately, you could throw Asus's system at machine learning if alt-coin crunching doesn't work out for you.

The board is sampling now and will go on sale later this year.

ASUS reckons it's broken away to a three-GPU lead over all other mobos-for-miners vendors. It'll be interesting to see if and when those rivals catch up. And more interesting still if HPC types put this ATX-form-factor board to work on tasks of greater utility to humanity. ®