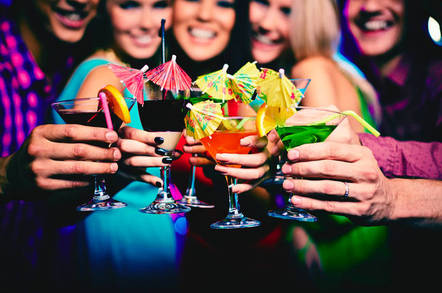 Bar staff at a nightclub in Paris have hit upon a two-for-one idea to boost custom by promising female patrons that dare to bare their boobs a small, free drink.

Wanderlust, an open-air club billed on TripAdvisor as the best in the French capital by one punter, displayed a sign that stated "tits = shots". It was spotted, photographed and published by Twitter user Anne GE.

"The bartenders offer girls a free shot as long as they show their breasts," she told her followers, before questioning if those that agree to expose themselves have not already drunk too much.

Further, she said the breasts were being snapped by a Polaroid camera and the pics then displayed behind the bar for all and sundry to perv over.

Wanderlust management replied to Anne claiming they "were not aware" of the booze-for-boobs promo taking place within the establishment.

"The photos will be removed immediately and we are considering sanctions against those responsible," Wanderlust tweeted.

It is not clear what sort of punishment the staff will receive, but given the bar is in Paris, it might involve being forced to be pleasant to customers for a whole year. Sacré bleu!

Earlier this week, a nightclub on the French Riviera was found to be offering ladies wearing miniskirts shorter than 25cm a free drink. ®